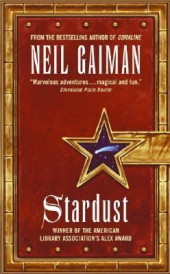 Tristran Thorn is desperately in love with the beautiful Victoria Forester. He attempts to prove his love for her by promising her impossible things - diamonds from Africa, pearls from India, and the star that falls outside of their village. Impulsive Victoria agrees that she will kiss him if he brings her back the shooting star. Tristran sets out on a journey, determined to find the star and win Victoria's hand. But it will not be easy - the lands outside their village are inhabited by witches, dueling lords, and enchanted creatures. And the star Tristran set out to find? Instead of a shining orb of light, she is a beautiful young woman with some secrets of her own.

This is my first time reading Neil Gaiman and while I found it a good read, I'm not convinced that I want to read the remainder of his work as a result. The characters never really seemed fully developed to me. We spend most of the novel with Tristran and Yvaine, the star. Their characters and ultimately, their story, were utterly predictable. I was very interested in the ancillary stories and characters, though. I wanted to know more about them, but Gaiman sort of rushes us through these sections. We only get glimpses of pirate ships that sail above the clouds and the mountain peaks of Stormhold, but those were the things that were most compelling for me as a reader.

This book is often touted as an adult fairy tale. That seems to mean that our characters can have sex and curse, but there is little else to indicate that this is a book for adults. It would appear that Gaiman thinks there is nothing different about the way a grown-up would approach a world of magic. I was reminded of reading The Magicians, in which the author takes a familiar tale but adds whole new layers because his target readership is adults. I wish Gaiman had done something similar because this book stays safely in the territory of a story for kids or teens with the exception of a few brief moments.

Stardust is quick read and it certainly has moments of magic and charm, but unfortunately it did not convince me to join the Neil Gaiman fan club.What do you think, guys and gals? Am I the only one missing out on the Stardust love or is there another Gaiman novel I should have read instead?
Posted by Lindsey at 6:00 AM