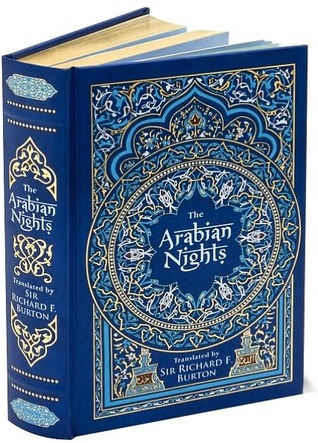 In one of the most ancient and well-known tales, King Shahryar discovers that his wife has been unfaithful. His brother makes a similar discovery and the two rulers summarily have their wives executed. In his anger, King Shahryar decrees that he will marry one woman every evening and then have her killed the next morning. Scheherazade, the lovely and brilliant daughter of the Grand Vizier, is exempted but she offers herself up as the king's wife. That night, she begins to tell a tale so fascinating that the king must hear how it ends. One story leads to another and Scheherazade manages to stay alive for 1001 nights.

I have been fascinated with Scheherazade since I was a young girl and read a novel from the point of view of her sister Dunyzade, who comes to the palace with her. It is really interesting to see how much of our popular understanding of this book stems from the movie Aladdin. As it turns out, the Disney movie pulls from several different stories. The Aladdin of The Arabian Nights is no hero - he is a total nudge who forces his mother to work to provide for him while he lounges about. Jafar is a villain in a completely different story and the magic carpet is in a different tale as well.

When reading this book, it's impossible to ignore the way that women and people of color are treated. There are many tales of a virtuous husband discovering that he has been cuckolded by his wife and a slave. The husband then kills them both and lives happily ever after. Some of this may be indicative of the time period and culture in which it is written but it is also possible that the frequency of this type of story has to do with Scheherazade's cunning. Because the king is enraged over exactly this event in his own life, it makes perfect sense to tell a version of this story where the avenging husband is both right in his vengeance and rewarded for his actions.

While this book may be terribly misogynistic, there are also some bright spots from the women in these tales. First, we have our brilliant protagonist herself. Scheherazade volunteers herself to save the other women of her kingdom and her wits not only save them all, but cause the king to fall in love and trust in women again. In the tale of Ali Babba and the Forty Thieves, Ali Babba is pretty clueless and is saved time and time again by his slave girl Morgiana. In the story The Two Sisters Who Were Jealous of Their Younger Sister, the Princess Perizadah is able to finish the quest that her bothers failed to complete.

The Arabian Nights is a beautiful collection of tales and deserves its place as a cornerstone of literature. While it is a long read, it will remind you of the incredible power of a good story.
Posted by Lindsey at 6:00 AM