Mini-reviews: The Home That Was Our Country and Daring to Drive 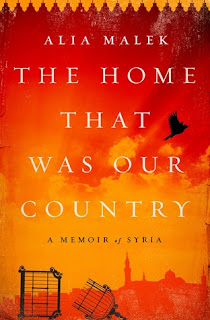 Alia Malek journeyed back to Damascus to claim the home that her grandmother lived in and loved. She returned as a woman who had lived in America, but also had a long history to trace in Syria. In The Home That Was Our Country, she delves into the history of her family while reporting the atmosphere in her homeland from Arab Spring in 2011 until she left two years later.

I was really interested in learning about recent and long-term Syrian history from someone who lived there. Unfortunately, I had a hard time with this story. Malek has clearly done her research and dives deeply into both her family's history and the history of the country that she loves so dearly. She writes deftly about the families who lived in her family's neighborhood as well as the necessity of changing what you can say, depending on the people you are talking to. But the writing was a bit dry and I sometimes had to force myself to pick it up and continue reading. The Home That Was Our Country might be a good pick for you, though, if you want an in-depth history of Syria told through the story of one family. 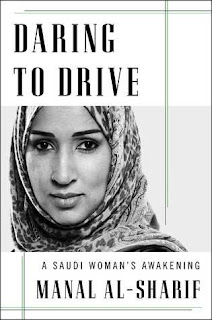 Manal al-Sharif was a woman living in Saudi Arabia, but she defied expectation in many ways. She graduated with a degree in computer science and used that degree in her job, which allowed her to help her parents financially and also to care for her son. But a single mother living alone within a company compound inevitably runs into some problems, which were compacted by Saudi Arabia's rule that women were not allowed to drive. Manal never set out to defy the government or religious officials; in fact, she was a devout and severe religious adherent as as teen. But she decided she had to take a stand and became the face of the movement calling for women to drive in Saudi Arabia.

Manal al-Sharif may work with computers, but her writing is strong and compelling. Her voice is the thing that pulls you right into her story as the police bang on her door in the early morning hours and the thing that makes you continue to read. For someone who lives in the US, it was sobering to realize just how much a driving ban would limit and, in many instances, endanger women. I only wish that there was a bit of a broader lens at certain moments: I wanted to know about the other people involved and find out where Manal sees the movement going, since women still don't have the right to drive in Saudi Arabia.

Daring to Drive
A Saudi Woman's Awakening
By Manal al-Sharif
Simon and Schuster June 2017
304 pages
Read via Netgalley
Posted by Lindsey at 10:58 PM

Email ThisBlogThis!Share to TwitterShare to FacebookShare to Pinterest
Labels: Alia Malek, Daring to Drive, Manal al-Sharif, Mini review, Netgalley, The Home That Was Our Country