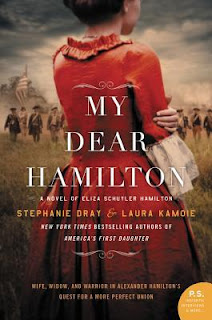 Like many of us, Stephanie Dray and Laura Kamoie adored a certain popular musical about the life of one of our nation's founders. But they found that they couldn't stop thinking about Hamilton's wife Eliza. She was the one who ensured that Alexander Hamilton was remembered and the two authors decided to find out who she was and make sure that she was remembered as well.

My Dear Hamilton strikes the perfect balance of being familiar to readers who know a little about Alexander Hamilton while giving added depth to Eliza. They bookend the story with President James Monroe appearing to an elderly Eliza, hoping that the two can reconcile. From this point, Eliza thinks back through her life and readers witness a young woman in war time, a mother trying to provide for everyone in her family, and a wife wounded by her husband's betrayal.

Stephanie Dray and Laura Kamoie have done a wonderful job in making Eliza a fully realized character, in spite of her leaving so few of her own letters and documents behind. I love that Eliza begins her story by telling readers "I was someone before I met Alexander Hamilton. Not someone famous or important or with a learned philosophical understanding of all that was at stake in our revolution. Not a warrior or a philosopher or statesman. But I was a patriot. I was no unformed skein of wool for Hamilton to weave together into any tapestry he wished. That's important for me to remember now, when every thread of my life has become tangled with everything he was...I was, long before he came into my life, a young woman struggling to understand her place in a changing world."

The book is a long one, but it's intriguing to see Eliza grow and change over several decades. It's clear from the note in the beginning to the last page of this story that Dray and Kamoie are rightly fascinated by this turbulent time in American history and the brave women and men who defined it. If you are a reader who loves historical fiction or a a person who weeps every time you hear them sing "Who tells your story? Eliza" in the Hamilton finale, you need to read this book.

My Dear Hamilton
A Novel of Eliza Schuyler Hamilton
By Stephanie Dray and Laura Kamoie
William Morrow Paperbacks April 2018
672 pages
Received from the publisher for TLC Book Tours
Posted by Lindsey at 9:33 AM