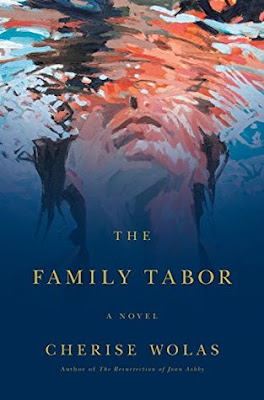 Harry Tabor is about to be honored as the Man of the Decade in Palm Springs. He will be recognized for his work in helping Jewish families escape persecution and resettle in Florida. Harry's family gathers to celebrate his accomplishments--his wife Roma, an insightful child psychologist; his daughter Pheobe who keeps talking about a boyfriend no one has met; his daughter Camille who is trying to discern where to take her anthropology work next; and his son Simon, whose new interest in his Jewish roots is causing problems with his wife. But before Harry can be honored, he vanishes into the night. Each family member has a secret, but it will be Harry's sudden memory of his actions many years ago that could unravel everything that they have worked to accomplish.

The Family Tabor is a story told in fragments: we get a bit of Harry's history and then a piece of a child's present. Cherise Wolas has written a book (and a family) that you must commit to following because it's not linear and it won't go where you expect. The present action is limited but, as each person reveals a little piece of themselves, we understand the full impact of their choices on their family. It's also an examination of how one family and its members fit within the history of a people and a religion as the Tabors decide what it means to be Jewish in the 21st century.

Wolas' writing is insightful and powerfully draws readers into the inner lives of her characters. It is clear that these people care for each other, even if they can't always be honest with each other. This story requires some suspension of belief with its conceit that Harry forgot something important for so long and Wolas is not afraid to leave her readers in unexpected places, but it's worth experiencing these characters and their search for where they fit in their family and the world.