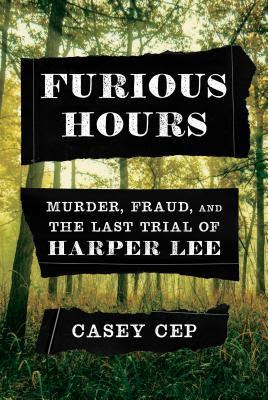 Rev. Willie Maxwell was suspected of murdering several members of his family and cashing in on the insurance money. He got away with it until a relative shot and killed him at a funeral. Even though 300 people saw Robert Burns shoot Willie Maxwell, he was acquitted. Harper Lee was fascinated by the story and decided to write her first nonfiction book. But modern readers know that Harper Lee never published this work. What happened to this tale of poverty, murder, and injustice?

I picked up this book because I adored To Kill a Mockingbird when I read it in high school. A decade and a half later, with an English literature degree under my belt, I can see Lee's talent as well as the ways she protected herself as a white woman. Casey Cep does a masterful job of presenting Lee as a woman who did the safe thing--while she may have believed that racism and discrimination were wrong, she never publicly condemned them.

While Lee is carefully rendered on the page, readers hoping to read 300 pages about her may be disappointed. She shows up only briefly until the last third of the book. The first two sections focus on the man suspected of murdering his family members, and the white lawyer who defended both the reverend and the man who killed him.

Cep is a truly excellent writer. The best nonfiction teaches you and shows you connections you didn't expect; Furious Hours accomplishes this in every chapter. This also may be one of the few books that actually caused me to laugh out loud, and I was surprised to find that I was chuckling about the history of life insurance.

This is a book about individual people--the small town minister who wanted money even at the expense of his family's lives, the lawyer who fought for equality before Alabama was ready for it, and the writer who fell victim to the power of alcohol and fear of failure. But Furious Hours is also a larger look at the cost of success, the victories and corruption of Southern politics, and the power of telling a story.
Posted by Lindsey at 12:25 PM