Women on the Run: Everything Here is Under Control and Boop & Eve's Road Trip 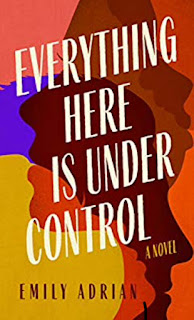 Amanda doesn't know where to turn. She is exhausted as a new mother and feels unsupported by her partner Gabe. In desperation, she straps baby Jack into his car seat and drives from Queens back to her hometown in Ohio. She's hoping to find solace and guidance from her childhood best friend, Carrie. Their lives took very different paths after high school, but Carrie seems to know what do as a mother, as a business owner, and as a woman making her way in the world. Amanda's unexpected arrival will force both women to examine what they truly believe about motherhood and friendship, and what kept them apart for all these years.
Everything Here Is Under Control is a story of contrasts. The story is told from the present and from the past, when Amanda was newly in love and figuring out her life and Carrie was the one with a new baby and spit-up on her shirt. One of my favorite parts was witnessing the two friends realize they had no idea what the other's life was really like--Carrie remembers having no tolerance for hearing about Amanda's carefree life while she was in the trenches of motherhood, and Amanda realizes she was a complete jerk to her friend when she needed her help. There is something simmering under Amanda and Carrie's relationship that readers don't learn until the second half of the book. This new knowledge is jarring and, while it makes their dynamic make more sense, it is strange for the reader to be processing something that the characters have known all along.
Everything Here Is Under Control
By Emily Adrian
Blackstone Publishing July 2020
272 pages
Read via Netgalley 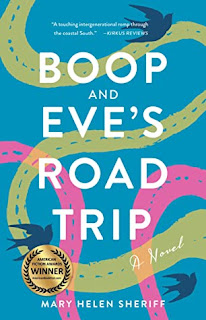 Boop is concerned about her granddaughter. Eve seems perpetually unhappy, especially when her mother Justine brings up going to medical school. Boop wishes Eve could learn some gumption, and to stand up for herself. When Eve gets a cryptic message from her cousin and best friend Ally, grandmother and granddaughter decide to embark on an epic road trip to find out what is going on with Ally, and give them some time to figure out what to do with their own lives.

I love intergenerational stories, and I was excited to find out more about the amazingly named Boop and her granddaughter. But both women suffered from an inability to speak up--Boop about her past and Eve about what she wants in the future. It seems author Mary Helen Sheriff was unsure whether she wanted to write a lighthearted road trip romp or delve into the pain of depression and unresolved family trauma, so we are left somewhere in the murky middle.