Review: The King of Infinite Space 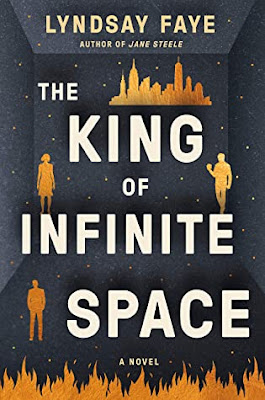 Jackson Dane has died and turned his son Benjamin's world upside down. Ben's mother has remarried, he's seeing his lost love Lia in his dreams again, he's not sure who he can count on, and no one knows what will happen to the theatre empire his father built. His best friend Horatio comes to help, and the two start to wonder if Ben's father actually committed suicide. Lia is working at the Three Sisters' Floral Boutique and starting to suspect that there may be something strange about her employers. None of them can predict what will happen at the theatre's annual gala, as they discover truths about themselves and what really happened to Jackson Dane.

If you know your Shakespeare, you recognized right away that The King of Infinite Space is a retelling of Hamlet. Trying to bring a new spin to a beloved Shakespearean play is a tricky endeavor, but Lyndsay Faye rises to the occasion (as she usually does). Instead of just working with one play, she pulls in characters and elements from multiple Shakespearean tales. This story is imbued with all the darkness and longing of the original work, but it is still accessible to people who have never seen the play.

The reader gets to experience multiple points of view, as readers hear from Lia (Ophelia), Benjamin, and Horatio. Each of these characters is given new depth and angles. Ben is a philosophy student who is equally charming and manic as he wonders about the purpose of life and love. Horatio, a political science professor, is an anchor and balance for Ben's swings. Lia is an artist, who is trying to decide just how much she wants to depend on her relationship with Ben.

Lyndsay Faye writes beautifully; her descriptions both bring New York City and the New World's Stage Theatre to vivid life. You can't help but root for and care for these characters, even as they make decisions that will definitely end badly. The King of Infinite Space is a book for anyone who loves Hamlet, anyone who loves a mystery (and yes, there are twists even for those who know the play well), and for anyone who loves a good story about the tragedies and yearnings of life.

The King of Infinite Space
By Lyndsay Faye
G.P. Putnam's Sons August 2021
381 pages
Read via Netgalley
Posted by Lindsey at 7:00 AM