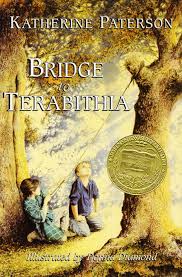 “We need a place," she said, "just for us. It would be so secret that we would never tell anyone in the whole world about it…It might be a whole secret country,’ she continued, "and you and I would be the rulers of it."
Her words stirred inside of him. He’d like to be a ruler of something. Even something that wasn't real.
Jesse Aarons knows that this is going to be the year – the year when he is the fastest runner in the fifth grade. He has been practicing all summer and is shocked when he loses to Leslie, the girl who has just moved in next door. She is different from the other kids that he knows. Leslie has read books like Hamlet, but there is no TV in their house. Her parents are wealthy writers who allow her to call them by their first names.
Despite her eccentricities, Jesse is drawn to her and the two become best friends. They travel into the woods behind Leslie’s home and create an imaginary kingdom called Terabithia. In the magical land, Jesse and Leslie reign as king and queen and learn to fight monsters both real and imaginary.
This is my second time reading this book. The first was in elementary school when I was a nerd girl trying to win the school reading program. You picked a book from the list provided, read it, and then took a quiz on the book. I remember reading this book and enjoying it, but being very annoyed by the computer teacher who insisted on asking me, “Did you cry? Did you cry?” the whole time I was trying to take the test. Sigh…the trials and tribulations of elementary school.
As I read the book this time around, I loved it all over again. I am reminded that Katherine Paterson wrote other books I loved in elementary school such as The Great Gilly Hopkins and Jacob Have I Loved. Paterson really captures childhood on the brink of adolescence. She writes insightfully about not understanding your parents or being understood by them, being frustrated by your siblings one day and their best friend the next, and the single minded devotion children give to things like drawing, running, and playing make believe. Bridge to Terabithia is a really beautiful book that captures the joy and the pain of childhood.
So what's the big deal?
This book has been banned in several states, based on two issues. The author herself explains, "Initially, it was challenged because it deals with a boy who lives in rural Virginia, and he uses the word 'Lord' a lot, and it's not in prayer. Then there are more complicated reasons. The children build an imaginary kingdom, and there was the feeling that I was promoting the religion of secular humanism, and then New Age religion."
I have to admit that in both readings, I can't remember instances of cursing. I'm sure they are there, but they don't stand out to me as offensive - they just appear as the way a boy or his father would talk. I find the religious component a reach as well. It is true that Leslie does not attend church at all, and Jess and his family only go on Easter. It is true that Leslie and Jess pray to the spirits of Terabithia. I don't find this offensive to my Christian beliefs, and I have to imagine that it does not threaten the beliefs of any Christian, Jewish, or Muslim reader. This is just an instance of children playing - children exploring what they believe and where they fall in the balance between maker and made, king and subject.
Banned book sources here and here
Thank you to Sheila at Book Journey for scheduling and collecting all of the review for Banned Book Week. Be sure to check in with her for all of the reviews this week and to get all of the clues!! You will need all of them to enter the giveaway on Saturday.
The clue for today is: