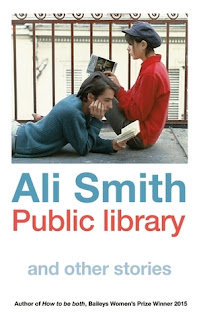 Like many of us, writer Ali Smith is concerned about the future of our public libraries. She lives in the UK, where downsizing or closing libraries is a frequent occurrence. So she wrote stories about the value of books, reading, and libraries in our lives. She went a step further and interviewed other writers about the impact that libraries had on their development as writers and as people. Although there is no story called Public Library within these pages, the memories and stories contained here serve as a battle cry for readers to fight on behalf of those beautiful places of magic and possibility that we call libraries.

The stories in Public Library are varied and many of them have nothing to do with libraries themselves. Each one is narrated by an "I," although I don't think they are supposed to be Smith herself. Some have a touch of magical realism, like the woman discussing World War I with the ghost of her dead father or the person whose chest starts to sprout roses immortalized in a poem by John Milton. The actual stories themselves were interesting, but I'm hard-pressed to remember the details just a few weeks later. 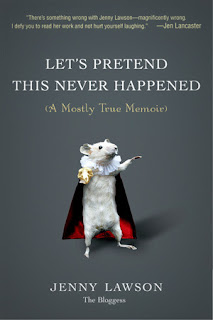 Jenny Lawson has had a weird life. She grew up in a poor family where her father worked as a taxidermist. Childhood memories include being entertained by puppets made of dead animals and swimming in a cistern. She tells the zany stories with true affection for her life and family, even as she reveals that the family propensity for stuffed animals seems to be emerging in her adult life.

It took me a while to get into this one, but I ultimately found it pretty funny. Jenny had some weird experiences handed to her, but she also relates those stories in a really wry and humorous way. She excels at poking fun at herself, but it's not all jokes in this book. She is honest about the pain (literal and emotional) of becoming a mom and her experiences with anorexia and anxiety.  I will be hard-pressed to forget how she thought her boyfriend was going to murder her when he was just trying to propose and just how terrible Jenny is at making party small talk.

Let's Pretend This Never Happened
By Jenny Lawson
Penguin Group March 2013
370 pages
From my shelves
Posted by Lindsey at 11:49 AM