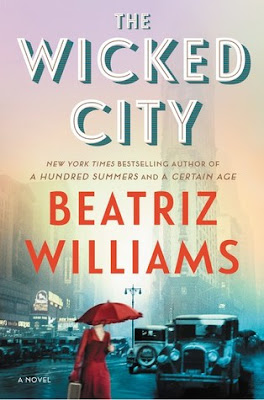 Ella Hawthorne flees her wealthy life after she finds her husband cheating. She moves into a Greenwich Village apartment where the residents hear mysterious jazz music late at night. The speakeasy that used to be next door was a frequent stop for Gin Kelly in 1924. She's a flapper who seems as if she doesn't care about anything or anyone. But Gin has some secrets: her stepfather is an infamous bootlegger and a Prohibition agent wants her to be a pawn in a dangerous game to bring down the entire operation.

Beatriz Williams is a much-beloved author and this is my first time reading a book of hers. She does a good job of managing dual storylines. I often find myself wishing to spend more time in one or the other, but both are engaging in The Wicked City. There are some nice parallels between the two stories as Ella leaves behind a relationship and expectations to find what she really wants, while Gin considers for the first time that it might be good to be needed.

From reading further about this book and its writer, it seems that Williams enjoys connecting her stories and characters. Devoted readers will be thrilled to see some familiar faces, but I wonder if some things were lost for this reader who didn't know the other back stories. There seemed to be quite a few people and story threads that were introduced only to be abandoned. I did read that this will be the first of at least two books, so perhaps they will get more page time in the second story. I also found that Gin was hard to get to know as a character. It's noted that she is gifted at turning on a different personality depending on who she is with and what situation she finds herself in. While this makes her fascinating, it is hard to really grasp who she is.

The Wicked City is a fun and fast-paced historical read that will immerse you in the dazzling possibility and dangers of New York City during the 1920s.

Want to learn more about this book? Visit Harper Collins here.
Want to read some more reviews? You can find the rest of the TLC Book Tour reviews here.
Posted by Lindsey at 10:20 AM