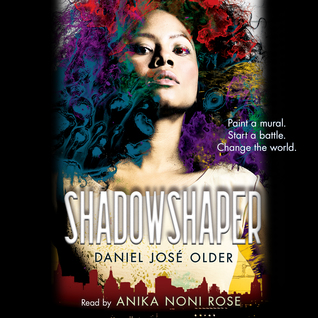 Sierra Santiago is ready for the summer, to spend time with her friends and work on the mural she has been commissioned to paint. But strange things are happening in her neighborhood: people are disappearing and a zombie crashes a party. Sierra learns that her grandfather, who has recently suffered a stroke, was a part of a group called the Shadowshapers. They can utilize magic through stories and art and Sierra discovers she also has this ability. With the help of a fellow artist named Robbie, she must find out who is attacking Shadowshapers and save her friends and family.

Many readers loved this story and I agree that Daniel Jose Older has created a fabulous protagonist, a fascinating kind of magic, and a vivid community of characters. But the best part of this book for me was the narration by Anika Noni Rose. She brings Sierra and every character to life with specificity and nuance. She could probably narrate a dictionary and I would listen with rapt attention.

There is so much going on in this story. You feel as if you are walking the streets of Sierra's Brooklyn neighborhood with her and it is clear that Older took care to ensure that each character is unique and well-known to the reader, even among the large group of Sierra's friends. I did occasionally wish we had some more information about the way that the magic of shadowshaping works, but we are learning through Sierra's eyes and so we are just as new to it as she is. There are several points in the story when Sierra isn't sure what she should do next; I'm pretty sure we would be the same if we suddenly discovered we were heirs to a complicated and dangerous kind of magic. I am excited to see what evils will infiltrate Brooklyn next and how Sierra will come into her own as a woman and as a shadowshaper.

Shadowshaper
By Daniel Jose Older
Narrated by Anika Noni Rose
Scholastic Audio 2015
7 hours, 21 minutes
Listened to via the library
Posted by Lindsey at 9:21 AM