Phryne Fisher On the Page and On the Screen

A few months ago, I was perusing my Netflix queue and happened to find a show called Miss Fisher's Murder Mysteries. It looked fun, so I decided to give it a try. It became my favorite show to watch after the kids went to bed or when I tried to write a blog post during naptime.

Miss Fisher's Murder Mysteries follows Phryne Fisher, who has come into a fortune later in life. She lives in Australia in the 1920s. Phryne is fabulous and she knows it. She ignores social convention by flaunting her lovers and even enjoying (!) her trysts. She drives her own car and is known to carry a gun (just in case). Our dear protagonist is hungry for knowledge and never content to leave a question unanswered. When local detective Jack Robinson finds her poking around his crime scene, he is initially irritated but soon discovers that Phryne is both charming and very good at solving mysteries. The two end up working together and the tension between the uninhibited Phryne and the very proper Jack is delightful.

There is also a fantastic roster of supporting characters including Phryne's butler (aptly named Mr. Butler); her ladies' maid/assistant Dot; Hugh, who works with Jack at the police station; and Burt and Cec, who help Phryne gather information. In the television show, these characters get enough screen time that you are almost in love with them as you are with Phryne herself.

After I finished watching the show, I stumbled upon the book series and decided to see what was source material and what was unique to the television show. The books were published before the television show was created, but they were recently re-released with tie-in covers. I read Raisins and Almonds and Murder in the Dark, which are #9 and #16 in the series.

I remember watching Raisins and Almonds on tv. Phryne is pulled into the dark corners of Jewish politics after a man is murdered in a bookstore and the owner is wrongly arrested. I don't remember watching Murder in the Dark, but it's certainly possible that the story was changed significantly or I've just forgotten one episode! In that story, Phryne is invited to a huge party at an estate. The host is threatened and people start to go missing. 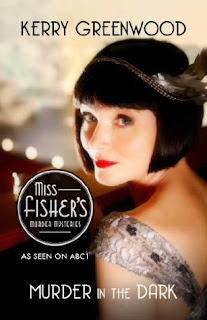 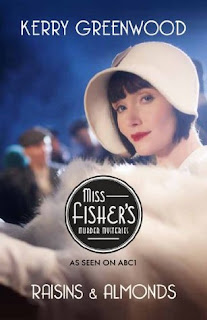 Both books gave me a good sense of Phryne herself, but I missed spending time with the secondary characters. They were almost entirely absent in one book and appeared periodically in the other. It also seemed to me that being forced to condense a story to just one episode made it tighter, as opposed to a sprawling 250 pages where you can devote pages to Phryne thinking or spend a page describing the lunch they are eating.

I will always be a big Phryne Fisher fan in whatever format I can find her. For someone new to the fabulous Phryne, the show or the books are a wonderful place to start. But I have to confess I think I will find myself re-watching the television show more often than I will be picking up another book.
Posted by Lindsey at 6:00 AM

Email ThisBlogThis!Share to TwitterShare to FacebookShare to Pinterest
Labels: Kerry Greenwood, Murder in the Dark, Netgalley, Raisins and Almonds