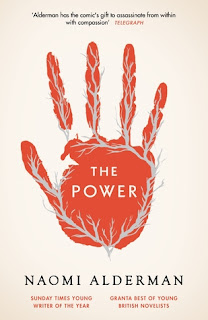 Almost overnight, everything changes. Girls suddenly have the ability to send electricity through their hands--they can use this to attract attention, to protect themselves, and even to hurt others. We follow four people as the power dynamic between men and women begins to shift. Margot is an American mayor wondering how this power will affect her political future and the decisions of her teenage daughter. Roxy is the tough daughter of a British gangster, while Allie is a terrified girl who runs away from her abusive foster family to the safety and possibility of a convent. Tunde is a young man in Nigeria whose knack for capturing the right moments catapults him to journalistic fame. The Power is a fascinating look at what it means to have and be in power.

This book is one of the most buzzed-about books in 2017. I heard about it first from my sister who was studying abroad and had the opportunity to read it before it came out in the US. The Power won the Baileys Prize for fiction and is appearing on many "best books of the year" lists. And it certainly is a fascinating idea: what would our world look like if women had a kind of power that men could never possess? How does a female-dominated society operate?

Unfortunately for me, this was one of those books that had a great idea but the execution fell flat. Aldermann gives us four very different perspectives, so we can see what is happening all over the world. This necessitates that we don't get close enough to all of the characters to really want to follow them. Personally, I was really intrigued by just two of them and found myself eager to skim through the other sections to get back to them.

Perhaps one of the boldest things the author does is to show us a world that really isn't that different from our current one. Power corrupts everyone, male or female, and Aldermann writes women who do not hesitate to threaten, injure, rape, or kill to keep their power. While I was intrigued, I found myself wishing for more nuance. Surely some things would be different if women were in power. While I would have loved to read that book, I am fascinated by Aldermann's ideas and look forward to seeing what she writes next.

The Power
By Naomi Alderman
Little, Brown, and Company October 2017
288 pages
Read via Netgalley
Posted by Lindsey at 4:39 PM