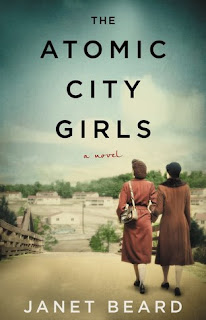 June Walker is 18 years old and looking for an adventure. She gets a job in Oak Ridge, Tennessee, working on a massive machine. But she can't tell anyone about her work because the city of Oak Ridge and the projects happening there are top secret. When June falls for Sam Cantor, a grumpy scientist working on a top-secret project, secrets are revealed and June and her friends must decide if they are willing to continue working towards such a terrible goal.

In The Atomic City Girls, we get a glimpse of day-to-day life for the women and men of Oak Ridge. We follow June and her roommate Cici, as well as Sam and Joe, an African-American construction worker. So many of the workers were cogs in the machine and did their jobs with no understanding of their ultimate goal--building the weapon that would end World War II. In spite of  not knowing, they are under strict orders to not reveal a single thing about their work or the town where they live; because of this, Oak Ridge becomes its own enclosed world.

Atomic City is a fascinating time and place, but the characters in this story are really flat. June is our primary protagonist, but it's difficult to put a finger on anything that makes her stand out as a character. Cici is a woman whose only goal is finding a rich husband by any means necessary and Sam is constantly cranky and mean seemingly without reason. Joe had the most interesting storyline for me, and it was heartbreaking to read that African-American workers were not allowed to bring their families with them like white workers were and discover the lack of basic amenities while their counterparts had their own dances, movie theaters, and bowling alleys.

I'm still curious about the work and the people of Oak Ridge, but I would recommend other historical fiction and nonfiction books to fill that spot in your reading list.