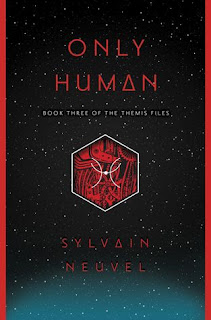 When Rose Franklin was a child, she fell into the hand of an iron giant. Years later, she has been on unbelievable adventures and discovered that aliens exist. Rose and her friends have spent a decade on an alien planet, but that won't be the most difficult thing. When they return to Earth, they find that new divisions have formed and the planet is on the brink of war. The existence of aliens might not matter after all; humanity is about to destroy itself.

This series succeeds at doing what the best sci-fi stories can--making us think about humanity because of a story about aliens. When Rose, Vincent, and Eva return to Earth, they expect to find a planet that has changed because we know we are not alone in the universe. But instead of uniting people, it has turned them against each other. They use the alien robots to take land and resources and fight other nations. Internment camps have sprung up across the world as everyone turns on their neighbor with the suspicion that they might have alien DNA. Our heroes have to decide which side they are on and what they are willing to fight for.

Sylvain Neuvel has written a great trilogy where each book takes the story in new directions. Each one is told through interviews and recording, but the characters are still very vivid. In fact, I found myself missing a few of them who aren't in this final book. The Themis Files books make the existence of alien races and giant metal robots seem entirely possible and is a wonderful addition to the canon of science fiction.

Only Human
Themis Files #3
By Sylvain Neuvel
Del Rey May 2018
336 pages
Read via Netgalley
Posted by Lindsey at 2:50 PM