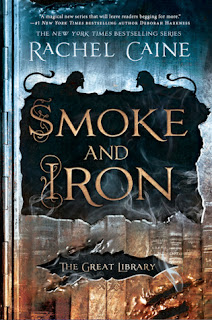 Jess Brightwell has deliberately put himself in danger by delivering himself to the Archivist Magister of the Great Library. Pretending to be his twin brother, he offers an intriguing business deal between the Library and his family of smugglers. Jess hopes to work from the inside of the library to bring its deadly reign toppling down. Meanwhile, Morgan is imprisoned in a tower in the library, their mentor Wolfe is a prisoner, and Dario, Thomas, Khalila, and Santi have been betrayed and are on their way to certain death. In this fourth book, our heroes have to convince others to join their resistance--they have seen the evil the Library can perpetrate. Will anyone join them to stand against the Archivist Magister?

I have to confess I initially thought that Smoke and Iron would be the final book in this series and groaned a little when I saw that there would be a fifth book. But as I read the story, another one seemed like a great idea. Rachel Caine's world is so fascinating and it's easy to see how she could create another series or two about the origins of the Library and the people who swear to protect it.

Happily, this isn't a book where the epic creation of countries and societies makes up for lackluster characters. Caine has put together a large cast of characters, but it's never difficult to remember who is who and each one grows and changes as the story progresses. The characters have specific strengths, but they also have some big flaws that could ruin everything.

Rachel Caine has written a great series with a world that comes to life before your eyes and characters you have to cheer along their journey. I will certainly be reading the final book to find out what happens to this unlikely bunch of people who will fight to the end for the fate of the Library and for each other.

Smoke and Iron
The Great Library #4
By Rachel Caine
Berkley July 2018
448 pages
Read via Netgalley
Posted by Lindsey at 4:05 PM

Email ThisBlogThis!Share to TwitterShare to FacebookShare to Pinterest
Labels: Netgalley, Rachel Caine, Smoke and Iron, The Great Library, YA