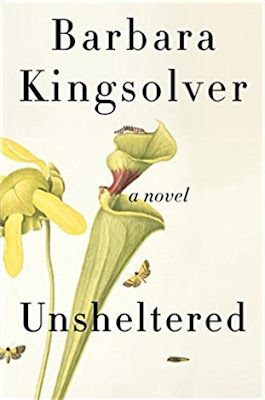 Willa's life has not gone the way she expected. She finds herself in a crumbling house in Vineland, New Jersey with her husband, her dying father-in-law, her adult daughter, her son's baby, and no job. Willa is determined to find a way to care for her family and when she discovers that a famous female scientist from the time of Darwin might have lived in her house, she thinks that  will be the key to ensuring their home doesn't fall down around them. The story moves through two timelines, as we see Willa and her family in the present and the people who lived in and around their home in the mid-nineteenth century--scientist Mary Treat and schoolteacher Thatcher Greenwood.

Barbara Kingsolver is the author of beloved books The Poisonwood Bible and The Bean Trees and a new book of hers is always a big deal in the literary world. In Unsheltered, she masterfully shows the frustration and heartbreak of doing everything right and not being able to make ends meet. Willa and her husband are both starting over again in their careers in journalism and academia instead of having stability after decades of working. She is having trouble navigating the endless complications of medical care for her sick father-in-law. Her son has finished graduate school, but his world implodes when his girlfriend commits suicide and leaves him as the sole parent to their baby. This kind of story is all too familiar to modern readers, who know all about stringing together several part-time gigs  and still not being able to pay the bills or spending all their savings when someone needs unexpected medical care.

There are many readers who felt that this book was too political and devolved into political diatribe with Willa's debates with her very Republican father-in-law or daughter Tig's ruminations on how the generations before her ruined both the planet and the economy. But for me, it felt very of the moment. It might be impossible to write about the past few years without acknowledging that very charged political discussions are everywhere and many people are discouraged and angry with the way things are going in the United States.

As always, Barbara Kingsolver gives a master class in doing good research and crafting rich characters that compel readers to follow them through a story. It is obvious she did a great deal of research into the accomplishments of real-life scientist Mary Treat and the fascinatingly bizarre origins of Vineland, New Jersey. She has written a book that captures this specific moment in time and also reminds us that having to start all over again is a familiar story across generations.

Unsheltered
By Barbara Kingsolver
Harper October 2018
480 pages
From the library
Posted by Lindsey at 4:49 PM