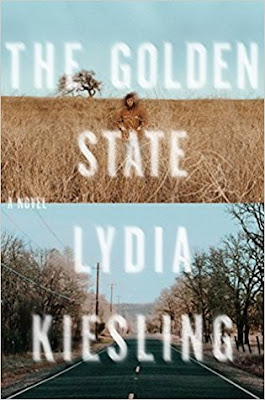 Daphne is on the brink of a breakdown. Her husband isn't allowed back in the country and she feels some responsibility for the accidental death of a young woman overseas. One morning, she simply leaves her office, picks up her daughter from daycare, and drives away from her life. Daphne finds solace in an isolated trailer left to her by her grandparents in eastern California, but the boredom of being alone all day with her toddler and her uncertainty about what to do next soon compel her to go into town. She cautiously befriends Cindy, a neighbor who is part of a secessionist movement, and Alice, an elderly woman who feels a little bit like family. Over ten days, the women's lives intersect in surprising ways as Daphne decides where her life will go from here.

I have to confess that it took me a long time to pick this book up. I had read some rave reviews, but the description just didn't compel me to pick it up. I am mature enough to confess I was very wrong and Lydia Kiesling's debut is a haunting, thoughtful story about the bonds of connection and the consequences of loneliness. She excels at capturing the overwhelming feelings of new motherhood, as Daphne alternates between wondering what she is supposed to be doing with this small child all day to rejoicing over a miraculous milestone to considering all of the terrible things that could happen in the single moment that she looks away. As a working mother, she is not used to having to account for every moment of her daughter's life and finds it equally terrifying and exhilarating (depending on the moment). Kiesling rarely uses commas, which means it takes readers a few chapters to adjust to reading her prose. But it wonderfully captures the endless lists that run through the heads of parents as we struggle to remember everything that we need to do while keeping a little one safe and happy.

The Golden State is also a look at what it means to be or feel like the other. Daphne's husband is stuck in Turkey after a visa snafu separated their family. She feels stuck between cultures because she herself is not Turkish, but she speaks enough of the language and knows enough about the country and its people to be offended when people start calling Middle Eastern people terrorists. With no immediate family around her, she feels isolated as a mother without anyone to mother her or teach her about being a parent. She hopes to capture some of the magic of her childhood by going back to her grandparent's hometown, however, she is familiar enough to warrant a polite greeting but not a true daughter of that town.

This is a travel story, it's a motherhood story, it is an everywoman story for the person who feels like they don't quite fit in and for the person who senses the slow simmer of fear and anger in current events and in their own life. Kiesling is a very talented writer with a distinct voice and and I look forward to going on other journeys with her characters.

The Golden State
By Lydia Kiesling
MCD September 2018
304 pages
From the library
Posted by Lindsey at 3:29 PM