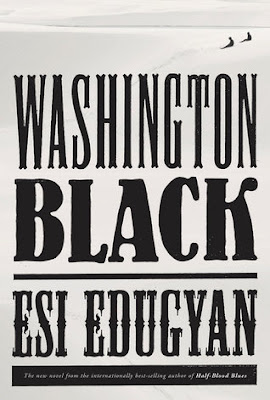 George Washington Black is an 11-year-old slave on a Barbados plantation. His life changes drastically when his new master's brother takes him under his wing as an assistant for his scientific endeavors. Instead of working in the fields, Wash now spends his days seeing the world through Titch's eyes, as well as learning to read and develop his talent for drawing. But he never feels entirely comfortable; the relationship between the two is certainly unconventional and destined to fall apart sooner or later. That day comes when a man is killed and Wash is blamed. Titch and Wash flee in Titch's hot air balloon and set off on an adventure that will take them around the world to London, Antarctica, and Morocco.

There were parts of this book that reminded me of Elizabeth Gilbert's The Signature of All Things because both books follow a person who was not expected to pursue science in their time. Wash learns about weather and creatures all over the world and later uses his knowledge to sketch and paint the wildlife and even collaborates with making the first aquariums. But there is always that feeling of uncertainty--even in places that are supposedly friendly to free black people, one wrong word or careless moment could mean the end of Wash's life. His relationship with Titch is the thing that took him away from the horrors of slavery, but it also haunts Wash as he wonders if it is possible for his mentor and father figure to think of him as anything other than a worthy cause.

Washington Black is a sprawling adventure that takes readers around the world. Edugyan renders time and place with beautiful specificity and the reader feels as if they could journey up the hill to Titch's balloon and watch the plantation below or see the endless expanse of Arctic snow for the first time. But the thread that runs throughout the entire story is that there is no safe place to be a black person in the 19th century--you can never truly be seen as just a neighbor, a friend, a lover, a scientist, or an artist because of the color of your skin.