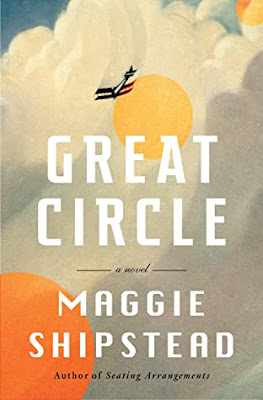 Marian Graves is a woman accustomed to close calls. As an infant, she and her brother were rescued from a sinking ocean liner. The orphans are sent to live with their uncle, and Marian transports alcohol during Prohibition to keep food on the table. As a teenager, she drops out of school and makes a dangerous bargain to achieve her goals of learning to fly and circumnavigating the globe.

Great Circle is a massive read, and not just in number of pages. Shipstead includes more characters and settings and plot points than most authors could fit between two covers, and she mostly succeeds in making them all cohesive. It's intentionally huge--the characters are people who want to span the globe or be remembered forever.

Marian has known from an early age exactly what she wants to do, and she is unwilling to let anything or anyone come between her and her goal. This lack of consideration leads to problems, which are highlighted through the secondary story of Hadley Baxter, a young actress who is researching Marian as she prepares to portray her in a movie. While the women are living decades apart, both struggle with the spoken and hidden expectations of women when it comes to sex, money, power, and control over their lives.

Shipstead is a writer who has left nothing to chance. While her novel is expansive, nothing is careless. I imagine that a second or third read would reveal connections that we all missed the first time around. Reading Great Circle means deciding to travel the world, cross centuries, and meet characters from bootleggers to WWII pilots to 21st century movie stars. It's evident that Maggie Shipstead loves her characters and you too will find that you need to know what Marian does next.

Great Circle
By Maggie Shipstead
Knopf May 2021
627 pages
Read via Netgalley
Posted by Lindsey at 3:26 PM