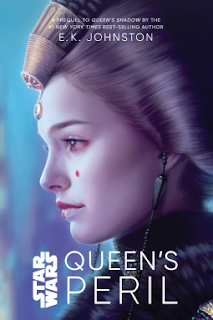 Padme Naberrie is newly elected as the queen of Naboo. She leaves her family behind and travels to the palace to begin her reign. But she will not be alone--she will live alongside a group of talented young women who will protect, advise, and assist her. When Naboo is invaded by the Trade Federation, the Queen and her handmaidens will have to work together like never before to survive the invasion and restore freedom to their planet.

Many of us watched The Phantom Menace and wished for more time with the brilliant, beautifully dressed, Queen Amidala of Naboo without interference from a certain whiny boy Jedi. E.K. Johnston has given us that chance with her fantastic trilogy (the third book will be out in April 2022). In Queen's Peril, Johnston expands what we saw in that first movie and shows readers that the greatest relationship in Padme's life was the bond between the queen and the handmaidens who would do anything for her. The book has some moments that readers may find difficult--as it turns out, the queen and her court have a fair amount of boring business to take care of and they are also teenage girls with an endless wardrobe at their disposal, so there is a lot of discussion of clothing. But Johnston excels at giving us a fuller understand of who Padme was and just how young she was when she was sent to rule an entire planet and ultimately, play a pivotal role in the future of the galaxy. 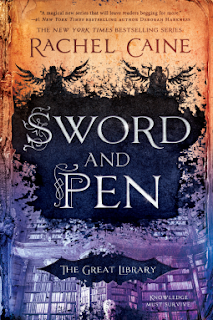 Everything has led up to this moment--Jess Brightwell and his friends have defeated the corrupt leaders of the Great Library. But they aren't out of danger yet--other nations and powers are willing to fight for their chance at control, and establishing a new Archivist could be the most perilous battle of all.
It's incredibly difficult to write about the last book in a series without spoiling the other four, so I will stick to discussing the series as a whole. Rachel Caine wrote an excellent YA series with The Great Library. The world she created is fully realized, and the characters are easy to love. Readers will truly see how much each character has grown since we first met them in book 1, and there is a straight line from strangers to wary allies to a found family that each of them would die to protect. It is no small feat to write five books with edge-of-your-seat action and characters who truly grow and evolve throughout the series. The Great Library series is a excellent addition to any YA collection.
Sword and Pen
The Great Library #5
By Rachel Caine
Berkley September 2019
368 pages
Read via Netgalley
Posted by Lindsey at 7:00 AM