The Borrower: A Novel
By Rebecca Makkai
Viking June 2011 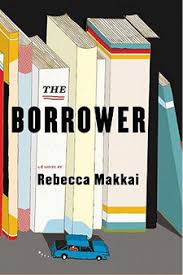 Lucy Hull is a small town children’s librarian with a big love for books. One of her favorite library patrons is ten year old Ian Drake. His imagination and spirit are compelling, even as his strictly evangelical mother severely limits his selection of books. Lucy has been clandestinely sneaking the boy books his mother will not allow him to read. She worries about him, fearful about his relationship with his parents and worried that Ian is being sent to a local program that promises to ‘un-gay’ children.

One morning, she comes into the library to find Ian. He has run away from home and camped out in the library. She offers to drive him home. Ian accepts, but then refuses to give his address and leads her on a wild cross country adventure.

This is a great book for people who love books. The references are endless and will make you stop to fondly remember the books that you loved as a child. Chapter titles are often book titles or literary allusions. The novel as a whole is enjoyable, but I think Ms. Makkai boxed herself in with her plot. Once Lucy has (for all intents and purposes) kidnapped Ian, the reader knows that there are only a limited number of options for an ending. Even Lucy knows that their adventure cannot continue indefinitely:

“I was surprised-and surprised to be surprised-but I couldn’t figure out what it was that I’d expected. Somewhere in the back of my mind there had always been a fantastical and illogical ending to the story, as crazy as Ian’s story about his grandmother, and if only I had bothered to examine it first, we wouldn’t be here. I’d forgotten that all runaway stories end like this. Everyone goes home. Dorothy clicks her way back to Kansas, Ulysses sails home to his wife, Holden Caulfield breaks into his own apartment. Huck didn’t go home, at least-but what happened to Jim? Probably something terrible. I couldn’t even remember.
What happy ending could I have been nursing, this whole time? It lurked there like a dream, half remembered.”

Perhaps the biggest hurdle to get over is that nothing really seems to change. If this novel is meant to be a great literary adventure, something must happen as a result of the journey. But in The Borrower, it seems that little changes for the main characters in the wake of their adventure together.  This frustrated me a lot – why in the world had they gone through this whole thing if they were only to end up (situation-wise if not geographically) right back where they had started? I liked this book, but ultimately didn’t adore it the way I had hoped that I would.

All of that being said, I have to leave you with this ridiculously wonderful quote about Lucy’s personal book collection:

“Thus Nabakov lived between Gogol and Hemingway, cradled between the Old World and the New; Willa Cather and Theodore Dresier and Thomas Hardy were stacked together not for their chronological proximity but because they all reminded me in some way of dryness (though in Dreiser’s case I think I was focused mostly on his name); George Eliot and Jane Austen shared a stack with Thackeray because all I had to his was Vanity Fair , and I thought that Becky Sharp would do best in the presence of ladies (and deep down I worried that if I put her next to David Copperfield, she might seduce him). Then there were various stacks of contemporary authors who I felt would get along together at cocktail parties, and there were at least three stacks of books I personally loathed but held on to just in case someone asked me to loan them a page-turner about a family of circus performers, or an experimental novel about a time-traveling nun. I’d hate to have to say that I knew the perfect book but I’d just given it away. Not that people often asked.”
Posted by Lindsey at 2:37 PM

Email ThisBlogThis!Share to TwitterShare to FacebookShare to Pinterest
Labels: Rebecca Makkai, The Borrower