Top Ten Tuesday is the brainchild of the ladies over at The Broke and the Bookish. I've played the top ten game once before and it was a lot of fun. Time for round two!

This week, we are discussing the stories that we wish the authors had continued in another book or two. I didn't come up with ten books, but I am happy with the seven I picked. So many books are a part of a series these days that it's hard to find a great standalone.

This is one of my favorite books, possibly ever. The characters are divine and Harkaway sends us whirling around the world to so many places and time periods that I am desperate for more time with them. March is a retelling of Little Women from the point of view of Mr. March. It got me thinking about the rest of the characters. What does Beth think about while she is sick in bed? Is Meg jealous of the drama and romance her sisters experience? Imagine a whole series from the viewpoints of the different family members... This book is about writing and storytelling and I wrote in my review that "the novel seems to start off traditionally, until we break into the stories created by Fox and Mary. Each one is so engaging that I wished it was an entire novel itself." I'm game, Helen Oyeyemi. Make it happen.

4. Oracle Night (or any book?) by Paul Auster Oracle Night has two plots...to start with, anyway. Suffice it to say that in Auster's capable hands, we could have multiple plots going on for a long time, through several books, and continue to be fascinated by each.

5. The Dovekeepers by Alice Hoffman This novel, based on the Roman siege of the Jewish fortress Masada, was meticulously researched. More than that, the characters were so compelling that I want to spend more time with them and find out what their lives were like before the events in this book.

6. The Night Circus by Erin Morgenstern 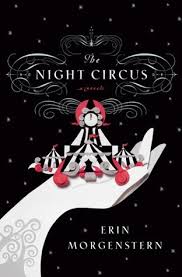 Ok, Erin Morgenstern says she has no plans to revisit the circus in novel form. But I think the world she has created is just begging to be let out to play again.

7. The Imperfectionists by Tom Rachman

Technically, I suppose I am arguing for a prequel here. This novel uses vignettes to tell the story of the last days of a newspaper staff in Rome. While we get a lot of insight into the end and a bit into the beginning of the paper, I want to know all about the characters and events in the middle - during the newspaper's glory days.


Which of your favorite books should have had a sequel??
Posted by Lindsey at 6:00 AM