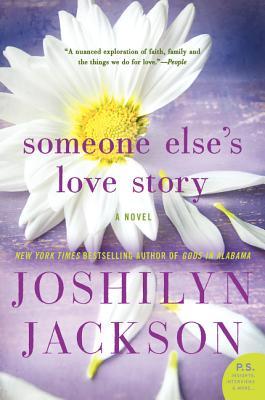 Shandi Pierce is trying to juggle all of the pieces of her life - her precocious son Natty, her forever-warring divorced parents, and the last few classes to finish college. But everything comes to a grinding halt when she and Natty are caught up in a convenience store robbery. She is terrified for her life but she is more terrified for her young son. Suddenly, a handsome man steps between her son and the armed robber. William Ashe seems like a hero to Shandi, but he would never call himself that. William has demons of his own - it's been a year to the day when his whole world turned upside down. William puts himself in harm's way during the robbery not because he is brave, but because life has lost its appeal. The events of the robbery will bring Shandi and William together in unexpected ways and may just help them to deal with the tragedies of their pasts and find a way to confront their futures.

Jackson is adored as a writer because she writes Southern charm like no one's business. In Someone Else's Love Story, we immediately feel a sense of place because the heritage and mannerisms of her characters are as important to her as the author as they are to her characters. Jackson also seamlessly blends an easily readable story with tough issues. William is dealing with a terrible tragedy and wondering if he has anything left to live for. Shandi has also suffered trauma but she is dealing with it by pretending it never happened. The people who love them try to help them the best ways that they can, knowing that their best efforts may not be enough.

Those things aside, I read this book with an uncomfortable feeling in my gut and it took me a while to figure out the reason for that. Spoilers ahead in this paragraph! Shandi's brilliant and beloved son Natty is the result of a rape at a college party. She has not gone to therapy to work through this terrible event and Shandi's father allows his new wife to berate Shandi about being sexually promiscuous (among other things) even though he knows what really happened. Shandi goes so far as to tell herself that Natty was immaculately conceived in order to deny the truth to herself. As someone who has suffered greatly from unwanted attention, it confused and frustrated me as a reader when Shandi sets her sights on William. While he never does anything specifically to ask for her attention, she decides that this heroic man will be the love of her life and a daddy for her little boy. Shandi even sees the white band on his finger where a wedding ring resided until very recently and concludes that it is a wonderful idea to take advantage of a man who is grieving a lost relationship.

There are a lot of good reasons to read Someone Else's Love Story. It's easy to speed through and it is imbued with humor and Southern charm. While it is fun to read, the characters are dealing with big life issues like faith and forgiveness. I may have had some qualms with parts of the story, but I can understand why readers love Joshilyn Jackson and the characters and stories she creates.

Do you want to find out what other readers thought about Someone Else's Love Story? Visit the TLC Book Tour and find reviews from 15 other bloggers!