Review: Last Night at the Lobster 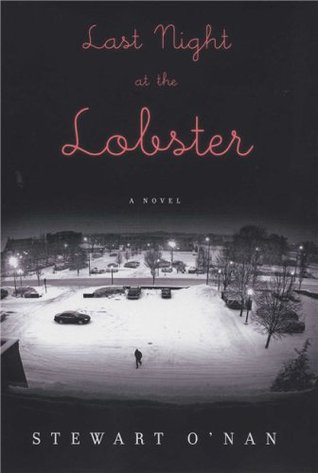 Manny DeLeon is about to embark on his toughest shift as manager. Their Connecticut Red Lobster has not been bringing in enough money and management has decided to close the restaurant the week before Christmas. On their last night, Manny has to wrangle a staff who doesn't know where they will go next, the usual ridiculous customers, his pregnant girlfriend on the phone, and of course, the woman he used to date...who works as one of his waitresses. And it's snowing. It's going to be a long night.

The premise here is simple, but Stewart O'Nan is a great author. He has created characters who are so lovable and real in all of their failings that you can't help but care for them. It would be easy for these people to become caricatures, especially in a novel this slim, but O'Nan is careful to give humanity to both the employees and the customers.

Manny is determined to do the right thing, even when everything seems to be working against him. Only half of his staff shows up for their last shift, but Manny does his best to lead them with kindness and pick up the slack for the people who didn't bother to come in. Throughout the day, he battles thoughts of his pregnant girlfriend and the seemingly golden past with his ex-girlfriend Jacquie. He daydreams about trying to win her back one more time, even while realizing he should pick up a Christmas present for his current girl.

How do people react when everything seems hopeless? Manny, Jacquie, and the other employees of the Red Lobster have lost their jobs, their confidence about the future, and perhaps some of their dignity as customers treat them terribly. Stewart O'Nan takes us back behind the hostess stand and into the kitchen to meet people doing the best that they can in the midst of the daily grind, a giant snowstorm, and the loss of their livelihood.
Posted by Lindsey at 10:34 AM

Email ThisBlogThis!Share to TwitterShare to FacebookShare to Pinterest
Labels: Last Night at the Lobster, Stewart O'Nan