During the most recent 24 Hour Readathon, I interspersed my reading with some comics. I had heard great things about each one, so I picked them up from my library and met some new comic authors and illustrators. 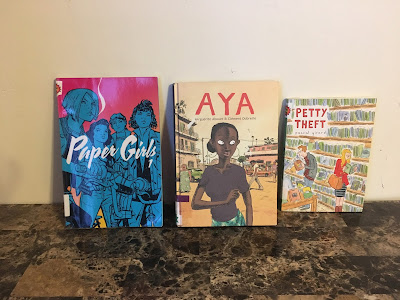 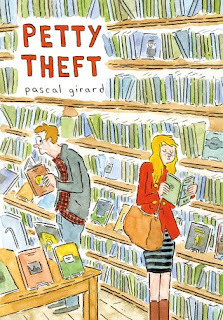 The first one I read was Petty Theft, which is about a man in the midst of a crisis. Pascal has just been dumped by his girlfriend, he can't seem to get inspired to start a new book and, to top it all off, he injured his back and can't get his feelings out through running. While wandering the aisles at a bookstore, he sees a woman steal his book from the shelf. He is instantly intrigued and convinces himself if he can only meet and befriend that woman, everything will be ok.

Pascal Girard's drawing style is spare in black and white. He doesn't shy away from showing the indignities of being middle aged and overlooked or crashing with friends when your life is a mess. Pascal and the object of his affection make many questionable choices and can be tough characters to root for, but it's a good pick for someone who needs to laugh when everything is going wrong. 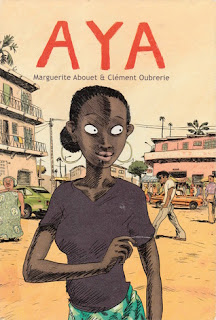 Next, I read Aya by Marguerite Abouet and Clement Oubrerie. This book is about the titular Aya, a teenager living on the Ivory Coast of Africa during the 1970s. The author writes in the introduction that she wanted to portray regular life, with its fleeting romances and family squabbles, instead of the war and famine that seem to represent Africa in popular culture. Aya takes readers with her as she goes out with friends, meets boys, and navigates the transition between teen and adult.

Reading Aya was interesting because it is a story like any other teen story; only the illustrations with the sandy roads and the colloquialisms throughout remind us that we are in Africa instead of the US or Europe. The authors truly try to bring you into the time and place of their story and the last few pages include recipes and fashion tips from the characters. If you enjoy Aya, there are five more books about her life and community. 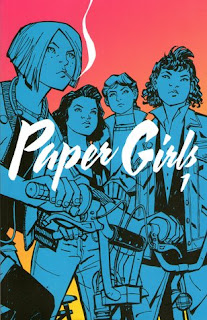 Paper Girls was my favorite of the three. I've read comparisons to Lumberjanes, a favorite in our house, and I can see the resemblance. In this comic, it's the later 1980s and Erin is out delivering papers in the early hours after Halloween. She expects things to be a bit strange, but she is unprepared to find a spaceship and zombie ninjas. Erin teams up with the other paper girls to keep each other safe and figure out what is going on in their town.

I was pretty little in the late 80s, but the fashion and colors are so fun to see on the page. It's definitely aimed at teens and adults, though, because this is one dark and violent tale. The story is wildly inventive, as you might expect from Brian K. Vaughan, and he leaves the first issue on a fabulous cliffhanger. There are three more volumes if you get swept up in the story of Erin and her fellow paper girls.
Posted by Lindsey at 6:00 AM