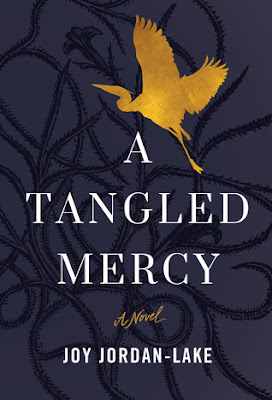 In 1822, Tom Russell is a blacksmith with an impossible choice to make. He has been asked to make weapons for a revolt orchestrated by his fellow slaves in Charleston. If he helps them, the consequences could be deadly. But toeing the line doesn't promise safety for him or the woman he loves, either. In the present day, Kate Drayton has messed up spectacularly. She walks out on the lecture she should be teaching and ends up in Charleston, the hometown of her mother. Her mother's recent death has left Kate with a lot of questions about their family and why her mother was researching a failed slave revolt in 1822.

Joy Jordan-Lake walked a precarious road while writing this book. She is a white woman who could easily draw on her own experience as a harried PhD candidate, but had to use research and empathetic imagination to give voice to people who might have lived through the very real revolt of 1822. She was almost finished with the book when a horrific shooting happened at Emmanuel AME Church, an important location to her story. She made the careful choice to incorporate that into her story; as much as we would like to think that everything is different 200 years later, it is clear that prejudice and hatred still live in our nation.

There were certain moments where I wished this book had been edited with a heavier hand, when plot points were dropped or details didn't make sense, but I was still pulled into the stories of Kate and Tom. It's clear that Jordan-Lake is enamored with Charleston itself, as well as its history. The city almost becomes its own character, as we wander down its streets today and 200 years ago. The characters are so compelling and the history is so beautifully blended with story that you may find yourself reading just a few more pages (or chapters) than you meant to read.

It's difficult to examine the horrors of the past without becoming overwhelmed or brushing past them with the claim that things are better now. Joy Jordan-Lake has written through a lens of hope and possibility without ignoring the tragedies that occurred. This is a wonderful book for any reader who loves historical fiction.

A Tangled Mercy
By Joy Jordan-Lake
Lake Union Publishing November 2017
462 pages
Read for She Read Book Club
Posted by Lindsey at 6:00 AM

Email ThisBlogThis!Share to TwitterShare to FacebookShare to Pinterest
Labels: A Tangled Mercy, Joy Jordan-Lake, She Reads