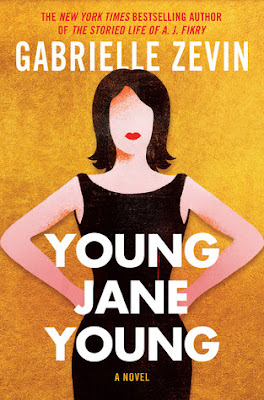 Aviva Grossman is ready to go out and conquer the world--she's young, smart, and pretty, and has recently been hired as an intern for a handsome, popular Congressman. When she and her boss begin an affair, she can't resist writing about it online (anonymously, of course). But it doesn't stay hidden for long. While the congressman is able to save his re-election campaign and his marriage, Aviva is vilified and despised. She decides her only option is to start a new life, so Jane moves to remote Maine and becomes a wedding planner. She lives a quiet life with her daughter Ruby, until she considers running for mayor. Can the secrets of Jane's past stay hidden or is it time for the truth to come out?

Like many readers, I adored Gabrielle Zevin's sweet and quirky The Storied Life of A.J. Fikry. So I was excited to read her newest novel. But I must confess that I picked this book up and put it down a few times before finally sticking with it because Young Jane Young is very different in tone and plot from A.J. Fikry.

Zevin uses several different perspectives to tell this story, including Aviva's mother, Jane's precocious daughter Ruby, and even the wife of the congressman. Each character is fascinating and uniquely written. I especially loved the relationship between Jane and Ruby, although Ruby's narrative, which is told through emails with an international pen pal, is sometimes a bit much.

This book strikes a great balance. It's obviously about some current and difficult issues, like the way women are treated in the media and the way that men can seemingly escape scandal without consequence, while women are blacklisted in their fields. But it's not a heavy book; there is a lot of humor to be found on these pages and you can almost see it play out in your head like a zany comedy on a movie screen. Young Jane Young is a fun and often delightful read that will also leave you thinking about the cost of being a woman in public who makes mistakes and the double standard for men and women in our modern culture.