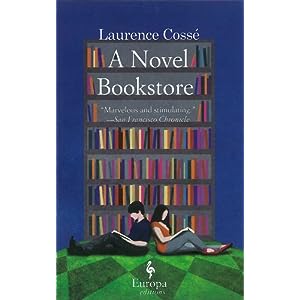 Three people have bizarre encounters within weeks of each other. The cases seem unconnected – a man disappears and claims he was abducted, a woman is driven off the road by a mysterious vehicle, and a man is harassed by a group of men who appear during his daily walk. But the victims do have something in common. They are all on the selection committee for The Good Novel, a unique bookstore where the only things sold are novels selected by a secret group of writers. As the threats escalate, the managers of the bookstore must find out who has a grudge against the bookstore and how far they are willing to take it.

I had heard often about how amazing Europa edition were, and when I found out that A Novel Bookstore was one of them, I scooped it up. Who wouldn’t love to hop inside the story of two people opening a bookstore and dream that you could do the same? While this is a mystery, the whodunit is not the most important part of this book. Instead, it is a fascinating look at the world of bookselling and a love note to every person who hold books in a special place in their heart. Let me give you a little snippet of the love:

“We want books that are written for those of us who doubt everything, who cry over the least little thing, who are startled by the slightest noise.
We want books that cost their authors a great deal, books where you can feel the years of work, the backache, the writer’s block, the author’s panic at the thought that he might be lost: his discouragement, his courage, his anguish, his stubbornness, the risk of failure that the has taken.
We want splendid books, books that immerse us in the splendor of reality and keep us there; books that prove to us that love is at work in the world next to evil, right up against it, at times indistinctly, and that it always will be, just the way that suffering will always ravage hearts. We want good novels.
We want books that leave nothing out: neither human tragedy nor everyday wonders, books that bring fresh air to our lungs.”

This novel will cause you to reevaluate the things you believe about books, because the characters are constantly considering these exact questions. They believe that there is something intrinsically necessary about an expertly crafted novel…until they are met with the belief that reading is a leisure activity and should be more enjoyable than difficult. They wonder about what makes a novel truly great. They wonder why people spend so much money buying books that are only average. They make book lists, many, many books lists (personally, I have a very lengthy Word document and random pieces of paper in my bag and on my desk) and then they scrap the lists to make better, longer lists.

The plot is not perfect. The mystery element is sort of brushed over at the end, because honestly it’s not the point. There is also an unknown narrator throughout. While most of the novel is told from a sort of omnipotence, once in a while we get some thoughts from “I.” When the narrator is finally revealed, it doesn’t quite make sense and I found myself sort of disappointed.

That being said, if you are a person who loves books, if you have one in your purse and one tucked on the shelf in the bathroom, and you are constantly scheming about what you will read next, you should sit with this book for a while. It is a gift to those of us who would rather be lost in the world of a book than just about anywhere else on earth.

Reading A Novel Bookstore, which is translated from the French, made me really think about the kinds of books that I read and my lack of international titles. Certainly I’ve read some but,when I thought of The Good Novel bookstore with a section for the novels of each country, I realized how heavily I read American literature. So now I’m appealing to you, the people who know about all the good novels. What international writers do you admire? What works in translation must I add to the library queue? Let me know in the comments!