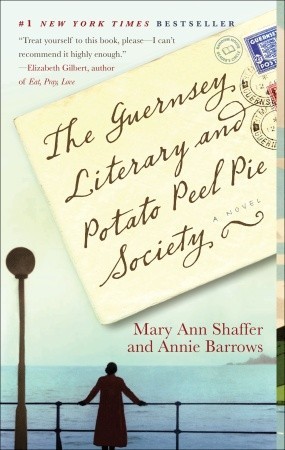 During World War II, Juliet Ashton wrote a column for a London newspaper about life during wartime. It was so well received that her columns were collected and published as a book to great acclaim. Now Juliet is looking for a new thing to write about and a new direction for her life. One day, she receives a letter from a man who ended up with one of her books. The two strike up a correspondence and Juliet learns that his island home was occupied by the Germans during the war. He and his friends accidentally started a literary society during the war years after being caught out past curfew. Juliet is fascinated by his story and decides that her next book will be about the inhabitants of Guernsey, never imagining that they will upend her life in the most unexpected and wonderful ways.

I think the best word for this book is lovely. It sounds trite, but this novel manages to be heartfelt without feeling saccharine. With the simple act of sending letters, the characters in this novel open their hearts to new people and new experiences. But the characters created by Shaffer and Barrows are not so kind that they are nauseating. Each one has some spunk, whether that means ignoring gender norms for their time or defying the Nazis by eating the last pig on the island and covering up their escapades with a book club.

This book is told entirely through correspondence and, although we may occasionally wonder if people would actually write such things down, the charm and optimism of the characters more than compensates for it. Perhaps one of the reasons that this book feels so warm and inviting is the story behind its authorship. Mary Anne Shaffer wrote most of this book, which was her first novel. After Shaffer became ill, her niece Annie Barrows (author of beloved children's books such as Ivy and Bean), finished the book for her. The love for family and literature that the two women shared is evident on every page of this story.

It's easy to look at the world and see a lot of darkness and pain. We have many authors who articulate that beautifully in both non-fiction and novels. The characters in The Guernsey Literary and Potato Peel Society have experienced the terror of war and the pain of loss, but now they are coming out the other side. It is good for the soul sometimes to read a book where everyone gets a happy ending, where people are genuinely kind to each other, and where the darkness of the past eventually gives way to happiness in the present.
Posted by Lindsey at 11:52 AM