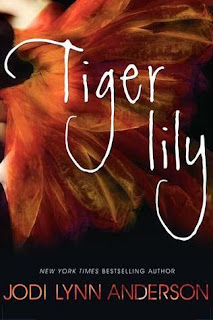 I picked up this book because I love Peter Pan and I wanted to read a YA book during the 24 Hour Readathon. I was excited to read it, but I had no idea how much I would like it!

Tiger Lily is the story of Tiger Lily and Peter Pan told from the perspective of Tinker Bell. But this version is different from any you've read before. Tiger Lily is a sort of outsider in her own tribe. She was discovered by her tribe's shaman as a baby and the people's respect for him protects her even as her neighbors watch her with suspicion. When Tiger Lily encounters the boy behind the terrifying legend of Peter Pan, she finds someone who might actually understand her. Their growing relationship is threatened when Tiger Lily is promised in marriage to the village brute, but their greatest danger will be in the form of a group shipwrecked on their island...and one girl named Wendy.

This book is not a fluffy love story. It's a dark tale about coming to terms with being a grownup and taking responsibility for the difficult choices we have to make. The characters in this book have been broken by their circumstances and by their loneliness. They don't really know how to make good choices. Even the villains aren't truly villains in this tale. People you think you should despise (Captain Hook, anyone?) turn out to have tragedies of their own to shape them into the people they become. The characters are so well-written that I am still thinking and wondering about even the most minor of them. I highly recommend this book to anyone who wants a new spin on Peter Pan's story or readers who appreciate a dark, well-written story. 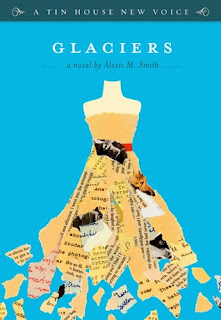 Isabel is not the kind of person you would notice out on the street. She is a quiet young woman who works as an archivist at her local library and likes to wear vintage clothing. Glaciers take you into her life for just one day. On this particular day, Isabel is thinking about the guy who works down the hall and wondering if she has the nerve to invite him to a party that night.

This book is short and not many things happen in its pages. We are just following one woman on one day, where nothing particularly catastrophic happens. And yet the story is utterly captivating due to Smith's gorgeous writing. Isabel wonders about what it means to be home and what it is like to travel. She grew up in Alaska and now lives in Portland. But she dreams of traveling the world, especially through her collection of vintage postcards.

Glaciers is a tiny jewel of a novel. The story is gentle and lovely and the perfect read for a rainy evening or quiet weekend. Witnessing Isabel's examination of her past and her hopes and dreams for the future can only cause readers to do the same.


Glaciers
By Alexis M. Smith
Tin House Books January 2012
174 pages
From the library
Posted by Lindsey at 6:00 AM