Readathon Mini-Reviews: Seconds and The Thrilling Adventures of Lovelace and Babbage 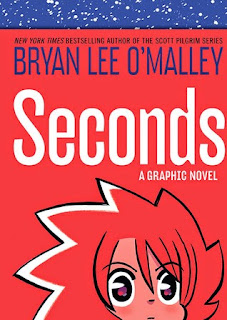 Katie is a talented young chef with her own successful restaurant and plans to open another one. But she doesn't always make the best decisions. When Katie reignites a tryst with the sous chef in order to feel better about the reappearance of her old boyfriend, disaster strikes. A waitress is terribly burned and Katie wishes she had a chance to do that day all over again. In the middle of the night, a girl appears in her room and instructs her to write down her mistake, eat a magical mushroom, and relive the day in question. So she does. She fixes her mistake. But Katie soon discovers that fixing one thing isn't enough - she wants to fix everything. As Katie rewrites her life, things quickly become complicated. Has she created a mess she can't get out of?

For a reader who doesn't often dip into graphic novels, this was a perfect pick. The story draws the reader right in - who doesn't imagine what they would do differently if they had a do over? The premise of the story is magical, of course, as Katie uses magic to live days over and finds herself on the bad side of an angry and powerful house elf. But at its core, it's about the responsibility of being a grownup and the knowledge that success in our professional and personal lives comes from hard work. There are no shortcuts or magic mushrooms. There is only putting in the time and the love and waiting to see what delicious combinations we can cook up. 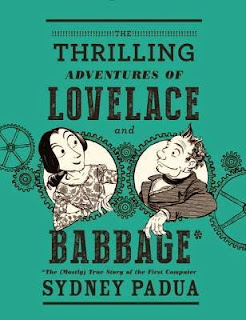 In ye olde 19th century, eccentric inventor Charles Babbage and sheltered mathematician Ada Lovelace invented plans for the first computer. Sadly, their machine was never built but it did go on to inspire more modern incarnations. Sydney Padua imagines what might have happened if Charles and Ada had brought their plans to fruition. How might they have used the machine? To save the economy? To finally get rid of street music? To fight crime? This book is jam packed with lots thrilling adventures and a good dose of Victorian history.

The Thrilling Adventures of Lovelace and Babbage is one of those books I desperately wanted to love, but found a little flat. I appreciate so much that Sydney Padua is bringing science and history to life in a really fun way. The comics themselves and the accompanying footnotes are often chuckle-worthy as the author reveals the disparities between what she imagines and the realities of history. But I found myself having a tough time transitioning between the stories and the notes. Padua has included copious notes and she obviously understands her science. I oscillated between trying to understand the machinery (so maybe not the greatest pick for the wee hours of the morning on Readathon day) and wishing that the comics themselves were longer. I wanted more zany adventures with Lovelace and Babbage and I wanted the ones I did experience to be more fleshed out.

The Thrilling Adventures of Lovelace and Babbage:
The Mostly True Story of the First Computer
By Sydney Padua
Pantheon April 2015
320 pages
From the library
Posted by Lindsey at 6:00 AM