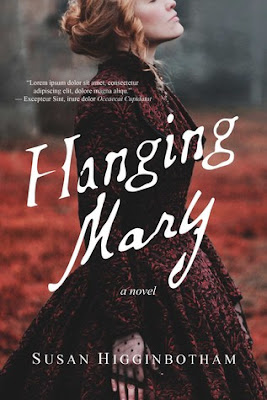 In 1865, several people were tried as conspirators in the assassination of President Lincoln. One of them was a woman. Mary Surratt was a widow who ran a boarding house. Her son worked for the Confederacy and was close friends with John Wilkes Booth. But how much did Mary contribute to the conspiracy? Was she a woman committed to the downfall of a Union president or did her love for her son make her blind to the danger he brought into their home?

Hanging Mary may be the story of Mary Surratt, but it is told by her lodger Nora. While we occasionally get some moments directly from Mary's point of view, much of this book is about Nora and her experiences as a Union supporter living among Confederate sympathizers. This means that we don't get to know Mary quite as well as we might hope to.

This book will certainly make you think about the power or lack thereof that women held in the 19th century. We witness Nora, Mary, and Mary's daughter Anna walk the fine line of propriety when it comes to just about every moment of their lives. Nora's father rigorously researched a place for her to live, and she lived with the Surratts because of the presence of other women in the house. As a widow, Mary often has trouble negotiating business without her son or another male to accompany her.

Hanging Mary didn't always succeed in making me fall for the characters, but it did give me a very real sense of what life was like in Washington D.C. at that time. I loved reading that girls would collect photos of John Wilkes Booth and was fascinated to read about the condition of prisons for women suspected of being Confederate spies. This book is a great pick for a reader who wants to immerse themselves in the Civil War or find out about a woman who could have changed history forever.