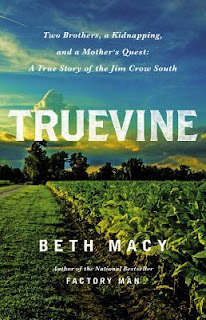 In 1899, two young boys were taken from the field they were working to become part of the circus. They spent decades being heralded as cannibals, aliens, and sheep men as people paid admission to see these two albino black men. But George and Willie Muse rarely saw any of the profits from their international stardom and their family back home in Virginia didn't know where they were or even if they were still alive. Their mother Harriet was determined to find them and to give them some control over their own lives, regardless of the cost.

Truevine is an intriguing read in many ways. Author Beth Macy struggles with being both an accurate reporter of facts and a kind fellow human as her research indicates that the often-repeated Muse Family story may not be quite what transpired. The book opens with Macy meeting Nancy Saunders, George and Willie's great-niece. She is a fierce protector of her elderly Uncle Willie and disinclined to let this white journalist talk to him. Nancy continues to believe that the boys were kidnapped, even as Macy accumulates evidence that their mother may have initially arranged for them to join the circus.

One of the most revealing moments in this book is when Macy questions if the circus might have been the best place for George and Willie after all. While the owners and managers certainly took advantage of the brothers, she examines what life was like for people considered freaks both inside and outside the circus tents. George and Willie were seen as different everywhere they went, whether they were up on stage or just sitting outside their home. It is impossible to escape the shadows that hang over this story: many of the people that the brothers performed alongside at the circus met terrible ends and the town of Truevine itself has a dark history of racism that is not as far in the past as we would like to believe.


Truevine: Two Brothers, A Kidnapping, and A Mother's Quest
A True Story of the Jim Crow South
By Beth Macy
Little, Brown, and Company October 2016
432 pages
From the library
Posted by Lindsey at 11:38 AM