Review: My Grandfather Would Have Shot Me 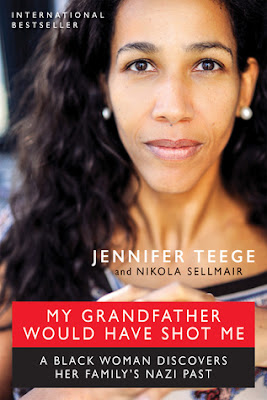 Jennifer Teege is perusing the shelves at her local library when she spies a surprisingly familiar image on a book cover. The picture is of her biological mother and the book is about living with the legacy of a Nazi father. Jennifer is shocked to learn that her grandfather was Amon Goeth, the infamous commandant portrayed in Schindler's List. Her life goes into a tailspin as she tries to come to terms with a beloved grandmother who was deeply in love with a war criminal who would have murdered Jennifer because of the color of her skin.

This book very intelligently has two authors. Jennifer Teege tells her own story, while Nikola Sellmair writes the history that surrounds her family. She details the life and atrocities of Goeth and the history of the places that Jennifer visits. The two voices are essential to this story. Jennifer's reactions, are of course, primarily emotional and personal. Sellmair's careful research places her story within the larger lens of history.

Jennifer's discovery spurs her to re-examine her entire life. She connects with her mother for the first time in years, and tries to sort out her feelings about her childhood as a black child in a mostly white neighborhood. She remembers growing up with an adoptive family who adored her, but made the difficult decision to cut ties to her biological family. She wonders how she can ever look her Jewish friends in the eye again and walks through the camp where her grandfather reigned in terror over the prisoners.

One of the most fascinating and disturbing parts of this book is Jennifer's realization that she is not alone in this bizarre situation. While she had no knowledge of the actions of her grandfather, there were thousands of spouses and children who knew exactly what was happening during the Holocaust. Multiple generations downplayed the atrocities committed or insisted that their loved one could not have been a part of such a thing. Even the descendents who were not alive during the war live with extraordinary guilt. How can a person atone for the actions of their ancestors?

My Grandfather Would Have Shot Me
A Black Woman Discovers Her Family's Nazi Past
By Jennifer Teege and Nikola Sellmair
The Experiment April 2015
240 pages
From the library
Posted by Lindsey at 6:00 AM

Email ThisBlogThis!Share to TwitterShare to FacebookShare to Pinterest
Labels: Jennifer Teege, My Grandfather Would Have Shot Me, Nonfiction November