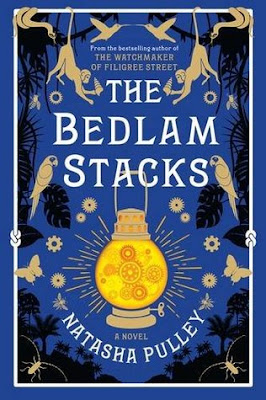 Merrick Tremayne is stuck. After an injury to his leg, he is confined to the crumbling familial estate where he is slowly going crazy of boredom (if his brother doesn't drive him there first). When the India Office asks him to take one last expedition, he knows that it will be a disaster. But his desperation to do something other than sit at home drives him to take the job, even though the men sent before him didn't come back. Merrick sets out into the Amazon to find the quinine that can cure malaria, but the locals or perhaps the local spirits aren't going to allow an easy expedition. Can Merrick trust the people he encounters? Will he make it out of Peru alive?

When I saw that Natasha Pulley had a new book coming out, there was no doubt that I would have to read it. I loved her quirky and charming debut The Watchmaker of Filigree Street and I was excited to see what magical and unexpected things she would do in her newest book.

As it turns out, the two books are somewhat connected. There is a minor inclusion of a character from the first novel, but it mostly feels as if the two books are two sides of one coin. Watchmaker was very centered in the possibilities of machines and gears within the city and Bedlam lives in the realm of forests and seas and ancient magic. But I found myself frustrated because I wanted more and less at the same time. This book can easily be described as sprawling; the author is in no hurry to reveal all of her secrets. It seemed to take forever to get to the heart of the story and when we finally do, it seems like Ms. Pulley left out things that would have made the story and the characters richer.

Although this story didn't work for me completely, I was enchanted by many parts of it and I find Natasha Pulley to be a wildly inventive and unique writer in a sea of similar stories. I will certainly be back for the fascinating stories and characters I can't help but adore.

The Bedlam Stacks
By Natasha Pulley
Bloomsbury USA August 2017
336 pages
Read via Netgalley
Posted by Lindsey at 6:00 AM