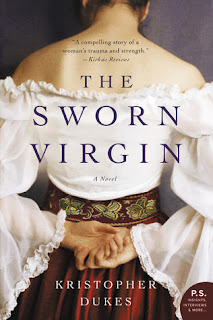 Eleanora is happy with her life. Her adoring father takes her with him on his medical visits and will allow her to travel all the way to Italy to study the art that she loves. But then he is murdered on the street as a victim of an Albanian feud and Eleanora and her stepmother Mirlinda must find a way to survive. In desperation, Mirlinda sells her daughter in marriage to a wealthy and cruel neighbor. Eleanora refuses to be sold off and instead takes the vow of a sworn virgin. This gives her the right to live as a man: to run her family, carry a gun, and be afforded all of the respect of a man. It just might give her the tools she needs to discover who murdered her father and why. But it means she must remain a virgin for the rest of her life, which becomes much more difficult when she saves the life of a handsome stranger.

I chose to read this book because the setting of early 20th century Albania sounded fascinating and I wanted to know more about the idea of essentially declaring yourself a man and receiving all of the benefits of that position. It's clear that Kristopher Dukes has done her research and she takes the reader over mountain passes and treacherous rivers to the towns and villages that Eleanora visits. I would have liked a bit more information about the sworn virgins within the story; Eleanora does meet one other virgin, but she mostly makes a decision based off of things she has heard and makes it up as she goes along.

Eleanora herself is an interesting character. She has been pampered as much as possible in their culture, as her father allows her to do as she wishes and she has no responsibilities and leaves all the housework up to her stepmother. This makes her a rather selfish person. When her father dies, she has very little compassion for her stepmother and still focuses on what she wants above all else. Romance starts to bloom between Eleanora and a man named Cheremi, and she never stops to consider repercussions. In The Sworn Virgin, Kristopher Dukes has given us an interesting character and shown us a world we don't often encounter in historical fiction. I just wish that we had met a woman who could be both brave and kind, headstrong and considerate.

The Sworn Virgin
By Kristopher Dukes
William Morrow August 2017
352 pages
Received from the publisher for TLC Book Tours
Posted by Lindsey at 9:43 AM