Exit, Pursued by a Bear: Can We Have Nice Things In YA? 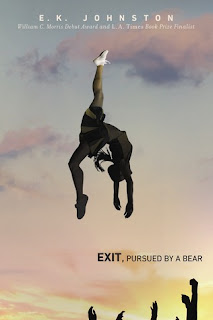 A note before we get started: This post will have spoilers for Exit, Pursued by a Bear and discussion of rape and rape culture.


In Exit, Pursued by a Bear, protagonist Hermione Winters is drugged and raped at cheerleading camp. She doesn't remember anything, so she doesn't know who the rapist is. It's even possible he is one of the boys on her squad, someone who she sees every day and considers a friend. Throughout the story, readers witness Hermione cautiously move back into her life--she goes back to school, starts seeing a therapist, and returns to the cheerleading team.

I thought this book was great. E.K. Johnston is a really excellent writer and it is clear that she cares about her characters. Hermione gets the help that she needs as she recovers from trauma, her family and friends are supportive and caring, and by the end of the book, she can see how to keep moving forward despite the terrible thing that has happened to her.

Then I did something silly and I read some reviews of this book. I found several people who thought this book was unrealistic. They wanted to know where the public shame was and why her friends took care of her instead of abandoning her. The only person who is awful after the assault is Hermione's boyfriend, but even he eventually supports her after their cheerleading teammates confront him. To some readers, it seemed unimaginable that a girl who has been raped would have a fun night with her friends or laugh with her therapist.

I guess it all comes down to the reason that we read stories. Do we read to be reminded of how terrible the world is or do we read to imagine that we can do better? When teens read this book, I think they should believe that people will be there for them if they ever find themselves in a situation like Hermione's. I know YA is not always realistic, but I don't think there is a problem with it reflecting the best of us--the parents who support us, the friends who won't abandon us, and the community that supports us even (and maybe especially) when everything is falling apart.
Posted by Lindsey at 2:11 PM

Email ThisBlogThis!Share to TwitterShare to FacebookShare to Pinterest
Labels: E. K. Johnston, Exit, Literary life, Pursued by a Bear, YA