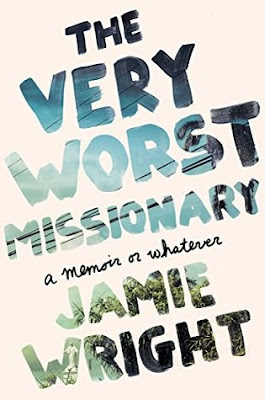 Jamie Wright rather unexpectedly found herself a missionary in Costa Rica with her husband and three sons. She quickly discovered that they didn't have the right training to do this job and that they had been sent to an area with many people who were doing the same work. She had been writing about their experiences to family and supporters back home. But as she became more lonely, disheartened, and worried that they might be doing more harm than good, she started writing the truth. When she was dubbed "The Very Worst Missionary" by a supporter withdrawing their contribution, she agreed and wondered if the worst missionary is the one presenting a perfect picture while falling apart on the inside or the one who admits that they are a mess and need grace just like everyone else.

Wright starts off her book with an apology, recognizing that her story and the ways she tells it are probably not what you expect. Snark and swearing are not always welcome in books about faith, but she wields both throughout The Very Worst Missionary. She begins by explaining their family's journey to faith and how they felt like they had found a home in their local church. But it wasn't long before Jamie noticed a disparity between what Jesus said and what the people in her congregation did. In spite of her questions, she and her husband Steve took their youth group on a short missions trip to Costa Rica and felt like it might be the perfect life for an adventurous family who loved Jesus.

Jamie's life and work in Costa Rica are nothing like she expected and she realized that her family might be hurting the very people they wanted to help. This is not a book that wraps up nicely in a bow. Wright says early on that she still struggles in her forties with many of the things that she struggled with as a teenager who wandered a college campus in a biker jacket at fifteen. In part, this may be what was frustrating to me. She does an excellent job of articulating the things that are wrong with the way that the American Christian church sends missionaries out into the world. But after pointing out the problems, she doesn't offer a solution. Maybe I am putting too much on one person but I want to know what we should be doing, not just the things we as the church do terribly wrong. However, if you see some problems with the concept of modern missions, Jamie Wright is right there with you. Even if she doesn't have the answers, she has some really funny stories to keep you company along the way.

The Very Worst Missionary
A Memoir or Whatever
By Jamie Wright
Convergent Books April 2018
230 pages
Read via Netgalley
Posted by Lindsey at 1:32 PM