Mini-reviews: The Book of Esther and Jane Steele 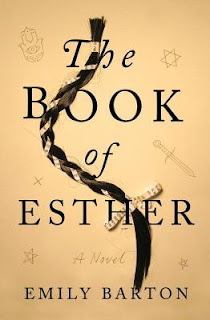 It's 1942 and Esther is the daughter of a top official in Khazaria. As Jewish refugees crowd into refugee camps and Germania approaches their boarders, Esther seems to be the only one who truly understands the danger they face. She steals one of her father's mechanical horses and sets off with her best friend to seek out the Kabbalists, a group that just might hold the key to winning the war.

The Book of Esther is a somewhat dizzying read, as Emily Barton constantly redefines the kind of book she is writing. It's an alternate history, with a side of steampunk and the supernatural. It's somewhat difficult to read, as Barton has changed a significant amount of history/geography/people of note. But it's sometimes tough to know what is accurate and what Barton has rewritten for story purposes (obviously the werewolves and metal horses are fictional). This book didn't really work for me, but it's an inventive adventure for the reader looking for a very unique story. 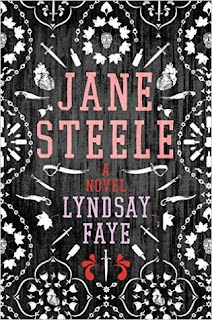 Jane Steele sees many similarities between her life and the life of her favorite heroine Jane Eyre. She finds herself in horrible situations with her aunt and her boarding school. She flees her school and tries to survive on the streets of London until she makes an intriguing discovery. There are new people in her childhood home and they are looking for a governess. Jane plans to return to Highgate House and reclaim it from its current tenants. But her plan starts to fall apart when, like her beloved Jane Eyre, she starts to fall in love with the master of the house. Jane and Mr. Thornfield both have secrets that could destroy any hope of a relationship and even cost them their lives.

Jane Steele is a wonderful book to read. It's a fun, well-written story that you will be happy to speed through. Jane in her younger years reminds me a bit of a darker Flavia de Luce and I enjoyed imagining what kind of trouble the two girls could get into. Our protagonist struggles with what it means to be a good person when you've done horrible things and made impossible choices. While the book references Jane Eyre fairly often, you won't be missing out if you haven't read the classic yet. I'm sad that I waited so long to read it, but I would recommend it to any reader who likes a little darkness, adventure, and humor while following the best kind of heroine.