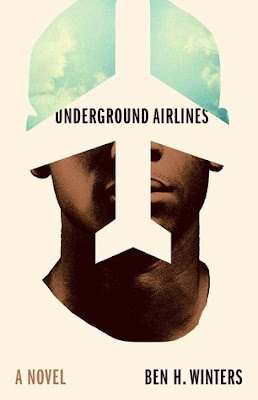 Victor works for the United States Marshalls. But his job description is not quite what you might expect: he tracks down slaves who have escaped and takes them back to the the Hard Four, or the states that still have slavery in the 21st century. Abraham Lincoln was assassinated before he became president and the Civil War never happened. Instead, the states decided to leave free states free and retain slavery in the states that wanted it. Victor is trying to find a man named Jackdaw. As he tries to determine who is illegally transporting slaves, he finds himself actually caring for the people he meets. It becomes increasingly difficult to ignore his own past and his growing feeling of unease about this case.

Underground Airlines manages to be two different books at once: it is a book that is carefully examining racism and history while also reading like a thriller. Once the story gets moving, it's difficult to put down as Victor peels back the carefully held secrets that are holding together the perilous division between slave states and free states.

The most jarring aspect of this book is the sheer number of things that are the same in this imagined universe as they are in our own. Northern states have "Clean Hands" laws, which supposedly means that they do not use products created through slavery. But everyone is complicit, as they ignore the pain and labor of black people in factories and plantations. Victor and his new friend Martha (a white woman) witness prejudice first hand as they travel together.

There is a lot to think about here, as Victor appeals to people's sympathies as a way to find and return people to slavery. Victor himself is an enigma. He slips in and out of personalities the way we might put on a jacket and Victor's not his real name anyway. The reader can't help but think of the ways that people of color are taught to put on a different personality to keep safe. He tries to separate what he is doing from the faces and fates of the individuals he captures and returns to their worst nightmare.

Underground Airlines and its author drew some criticism around publication. Ben H Winters is a white man and some people were angry that his book about slavery in an alternate timeline garnered the kind of attention that similar books by people of color had not. Winters handled it very gracefully, calling attention to the books and writers of color who had inspired him and conceded that he was privileged to get a lot of publicity for his story. Ultimately, it is a story that is continuing the conversation on race in this country and a well-written story worth experiencing.