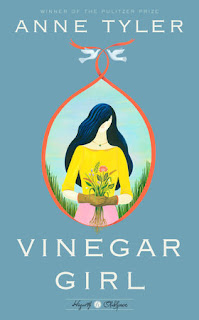 Kate Battista certainly didn't expect to end up here. She spends her days as an assistant at a preschool and then comes home to care for her eccentric scientist father, younger sister Bunny, and her garden when she finds a spare moment. Dr. Battista has one more favor to ask his daughter in addition to her cooking dinner and doing the household taxes: he wants her to marry his brilliant lab assistant so he won't be deported. Kate is furious with this proposition, but she soon finds herself seeing the possibility for both a relationship and a different kind of future in the joyful and charming Pyotr.

Vinegar Girl is the third book in the Hogarth Shakespeare series and a new imagining of the play The Taming of the Shrew. I read the play before jumping into the novel and found it to be near the bottom of my preferred Shakespeare plays. The characters seem very much like archetypes, as we never really get insight into who they are or why they do what they do. According to Shakespeare, a woman can be shrewish for no specific reason and a man will embark on a crazy scheme to marry a woman he has seen once. In Tyler's hands, our characters get a bit more depth. Kate is a woman who has trouble staying quiet, which we know is dangerous for females. When she calls out a college professor, she finds herself out of her botany program and caring for her family instead. Kate is not shrewish just for the sake of it; she is angry about things and trying to figure out how to express that. Her potential husband Pyotr, on the other hand, seems to never get angry. Instead, he is eager and hopeful, even when Kate continually brushes him off.

While Tyler's novel is a short one, she is able to focus on a smaller number of characters than Shakespeare wrote into his play. The reader no longer has to remember who is disguised as whom or which sister this particular suitor is after. Tyler has publicly stated that she is not a big fan of Shakespeare, and she finds Taming of the Shrew particularly painful. Her novel never captures the great wit or sweeping language of Shakespeare, but it does give us a charming romantic comedy  with a happier ending as we see two people bend because they love themselves and another, as opposed to a man shaming and conquering a woman through marriage.


Vinegar Girl
By Anne Tyler
Hogarth June 2016
224 pages
Read via Netgalley
Posted by Lindsey at 11:32 AM