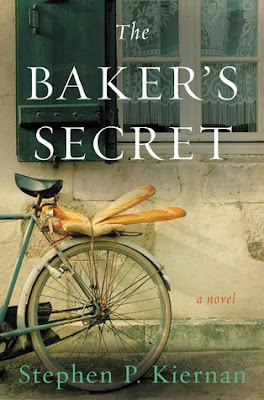 Emma's life has been brutally turned upside down by the arrival of German troops in her small French village. Her father has been imprisoned, the love of her life has been forced to fight for the Germans, and her mentor was murdered just for being Jewish. Emma no longer needs the fancy frosting techniques she learned from the local baker, but she has been conscripted to bake loaves of bread for the German troops. She adds straw to the batter, which makes 12 loaves into 14, so she can take that bread to the hungriest people in the village. Emma's two extra loaves turns into a stealthy effort to steal, trade, and barter whatever her neighbors need to stay alive and safe. But her carefully planned days are about to come to an end--Emma and her neighbors live on the shore of Normandy.

I love reading about the WWII era and it seems that Stephen P. Kiernan loves writing about it; his previous book The Hummingbird was about a Japanese pilot with plans to bomb the west coast of the US. While that novel had dual narratives in the present and in the 1940s, The Baker's Secret is wholly set in one small town, mostly during the war years. Kiernan does a wonderful job of portraying people who seem to be working for the German troops, while simultaneously working in the Resistance, helping their family and neighbors to survive, and praying for the day when their village will be free again. Emma bakes bread for the troops while also bringing food and other necessities to those around her, the local fisherman goes out for another catch so his neighbors don't starve, a local cafe owner inflates prices for the troops but not the townsfolk, and a beautiful woman starts dating a German commander to save herself from the unchecked desires of his troops.

In some ways, this book reminded me of the The Guernsey Literary and Potato Peel Pie Society. In both books, you see neighbors and friends sacrificing for each other. The author clearly took the time to really develop all of the characters. Even though we experience the story through Emma's eyes, it feels like you know the village veterinarian, Emma's beloved and senile grandmother, and Emma's former classmate who constantly frustrates her. It's fascinating to watch these lifelong relationships change through the crucible of war.

While the characters in this book are doing their best to make it through each day under the rule of volatile and unpredictable German troops, the tension rises for the reader because you know the significance of their location although the characters do not. This is the sort of story you want to clear your weekend to read, because you won't want to stop once you get invested in Emma, her neighbors, and the village of Vergers.


The Baker's Secret
By Stephen P. Kiernan
William Morrow May 2017
320 pages
Received for review from the publisher and TLC Book Tours

Do you want to learn more about this book? Visit the Harper Collins website here or check out more reviews at TLC Book Tours!
Posted by Lindsey at 10:16 AM