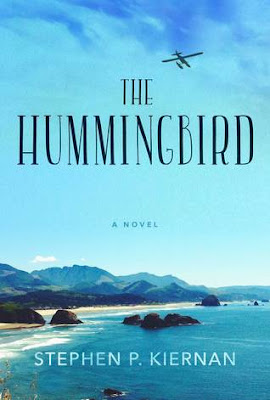 Deborah Birch is used to dealing with difficult situations. She is a hospice nurse, after all. But when her husband comes home from Iraq with serious problems, she is unsure how she can help him. So she continues focusing on her patients. Her newest case is Barclay Reed, a grumpy retired professor. Reed is not pleased to need assistance, but he eventually warms to Deborah and asks her to read his last academic endeavor aloud. His book is about a Japanese fighter pilot who returns to America after WWII. Reed proposes that this story might be just the thing Deborah needs to help her husband start to heal. The only catch is that he won't tell her if the story is true or an invented tale that cost Reed his career and his family.

The Hummingbird moves in dual narratives. Deborah's care for her patient and husband is interspersed with excerpts from Reed's book. It is fascinating to learn about Japanese plans for war and about the life of one pilot in particular. I often found myself wanting to spend more time with Japanese fighter pilot Ichiro Soga.

Reading about Deborah as a hospice nurse is inspiring. The people who do this kind of work are incredibly kind and patient. I also enjoyed watching the relationship between Deborah and Reed evolve. In the beginning, he is known as the patient who fires all of his nurses and enjoys outwitting Deborah. They soon start to really care for each other. But I sometimes had some trouble with Deborah and her husband Michael. Firstly, I worried for Deborah. I think when someone's spouse is repeatedly violent, there needs to be some intervention (even in fiction). And in spite of their serious marital problems and Michael's PTSD, Deborah seems unable to ever see him without thinking about how hot he is.

While I had some trouble with their part of the storyline, The Hummingbird provided my favorite kind of historical fiction. I loved learning that there really was a Japanese fighter pilot who attempted to bomb the American west coast and was later invited to visit the United States. This is a story of love and forgiveness, about learning when to fight and when to make peace, and about making a life that counts and learning to die with dignity.


The Hummingbird
By Stephen P. Kiernan
William Morrow September 2015
320 pages
Received for review from TLC Book Tours and the publisher