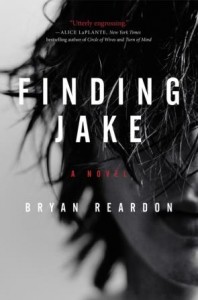 Simon Connolly has been a stay-at-home dad for the past sixteen years. While he occasionally feels awkward among the other parents in the neighborhood or dreams of going to an office to work with other grownups, he knows that the time spent with his children Jake and Laney is invaluable. One day, he gets a terrifying text that states there has been a shooting at the high school. All parents are asked to report to a nearby location. Laney goes home with her mother and one by one, parents are reunited with their children. Simon sits all alone, waiting for his son. Where is Jake? What really happened at the school?

Finding Jake moves in dual narratives, As Simon panics and tries to find his son, he thinks back to his childhood and all of the times that they shared together. In particular, he thinks back to the advice he gave his son to be kind to the kids who don't fit in. But when Jake befriends Doug, Simon feels that something just isn't right. His hunch seems to be confirmed when Doug is named as the shooter and Jake is named as his suspected accomplice.

This topic is one that strikes fear into the hearts of parents everywhere. The safety of our kids is our first priority and the thought that they could be harmed at school is terrifying. This story also tackles the problems of a 24 hour new cycle. Jake (and his family by extension) are immediately vilified, even before the police have solid evidence that he is involved.

I really appreciated that our protagonist is a stay at home dad. Author Bryan Reardon stayed home with his kids for eight years and knows how it feels to be the only dad in the bunch. Because of this, Simon feels like a realistic character as he tries to do his best for his children, maintain a strong relationship with his working wife, and come to terms with his feelings about being the one at home.

While I sometimes had trouble really connecting with Simon, I was always on the edge of my seat. The tension builds throughout each chapter as he thinks back on his years raising his son. Could his beloved son actually be a murderer?  How much can we as parents influence our children towards becoming good people? How well do we know our children?