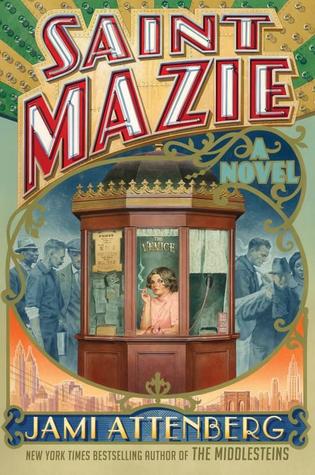 Mazie Phillips is a girl who wants to have a good time. When her sister and brother-in-law insist that she must start working at The Venice, the family movie theater, she is not pleased. But timing is everything and sitting in the ticket booth gives her a front row seat to the Depression that is striking New York City and the nation. Mazie does whatever she can to help the homeless and desperate men she encounters on the street. She lets them into the movie theater for free so they can be warm for a while, gives them money for food or shelter for the night, and even gives them a nip or two from her flask. Mazie would never call herself a good or important person but she is determined to do right by her family and the people who cross her path, no matter the cost.

The set-up of Saint Mazie is a very interesting choice. Ms. Attenberg introduces us to a researcher who is putting together a documentary on the woman who was called the "Queen of the Bowery." The story jumps from one perspective to another, as we hear from an old neighbor, the granddaughter of the theater manager, and Mazie herself via her diary. The fragmented nature takes some time to get used to, but Mazie herself quickly shines through and hooks the reader.

Mazie is an incredible character. While the city of New York City is brilliantly brought to life, Mazie is the driving force behind this book. From the start, she is independent and determined to do what she thinks is right. She feels alive among the people of the city, with the sense that any moment could turn into an adventure. She doesn't fit into societal norms, where a woman is expected to be demure and hope for a handsome husband and some kids. We get to watch Mazie come to accept and perhaps love the fact that she is kind and bold and determined.

Saint Mazie is based on a real person, who did help people who had fallen on hard times in New York City. Unfortunately, we know very little about the real-life Mazie. I can only hope that she was as feisty and wonderful in real life as she is in the pages of this book.
Posted by Lindsey at 6:00 AM