Mystery and Adventure Mini-Reviews: The Last Bookaneer and Murder on the Orient Express 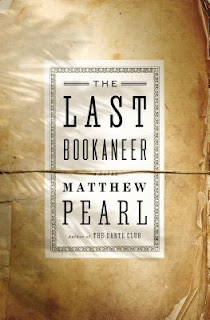 Clover is an underpaid and poorly treated porter on a train line. His happiest days are when a bookseller named Fergins comes on board and tells him stories about his life. Fergins was an assistant to an infamous bookaneer named Pen Davenport. Bookaneers are literary pirates who steal manuscripts to publish, often without the author's permission. Davenport and Fergins take a dangerous journey on their last and perhaps greatest mission - to steal the final novel of Robert Louis Stevenson from his island home. But they will have to outsmart the island's natives, a rival bookaneer, and the author himself to complete this mission.

I loved the idea of this book. What could possibly be cooler than literary pirates? But I found the actual execution rather lacking. Nothing in this story is experienced firsthand - instead, we get Fergins relating something that didn't even happen to him to Clover. Fergins doesn't tell a particularly quick tale. Instead, he meanders and then comes back...eventually. I wish there weren't so many frames to the story - Clover isn't a particularly compelling character, aside from the insight into the ways that people of color were treated at the end of the 19th century. I wanted to love this book but in the end, I found myself wishing it was shorter and that it took me on a greater adventure. 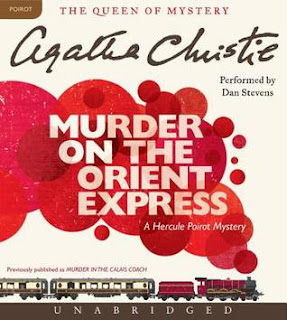 The Orient Express is speeding through the night when it is stopped by a snowstorm. Soon, the passengers discover that someone has been murdered. Samuel Ratchett lies stabbed in his sleeping compartment, behind a locked door. In a most fortunate bit of happenstance, brilliant detective Hercule Poirot is on the train. He quickly deduces that someone on the train must be the murderer. But can he figure out which one did it?

This was not my first Christie, but it was my first time experiencing the wonderful Hercule Poirot. I was smitten early in the story when he stated, "I do not like your face." The mystery, as expected, was wonderful. I was guessing until the very end and the solution still surprised me. Murder on the Orient Express is the perfect book to listen to instead of reading on the page. Sometimes it is difficult to keep track of details in an audiobook, but Poirot goes over the evidence several times as he interviews various passengers and proposes theories to his companions. The narration is absolutely perfect. Dan Stevens does a great job of narrating characters of different ages, sexes, and nationalities and each one sounds just as they should. Listening to Murder on the Orient Express is everything you could hope it would be.

Murder on the Orient Express
By Agatha Christie
HarperAudio September 2013; originally published in 1934
Narrated by Dan Stevens
6 1/2 hours
From the library
Posted by Lindsey at 6:00 AM

Email ThisBlogThis!Share to TwitterShare to FacebookShare to Pinterest
Labels: Mini review, Murder on the Orient Express, Netgalley, The Last Bookaneer