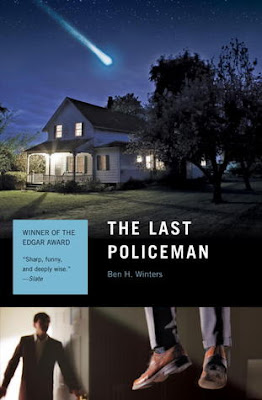 Hank Palace has recently been promoted to detective in the Concord, New Hampshire police department. He is eager to do good work and solve the homicides that come across his desk. But timing is everything and his fellow cops are less than enthusiastic about solving crime. These days, most deaths are suicides because the end of the world is coming in exactly six months. An asteroid will strike the earth and wipe out the whole planet.

In many end-of-the world stories, there is a sense of urgency because the end is inevitable (and soon). In The Last Policeman, there is a sense of ennui because the end is certain but it's a long way off. This may be a mystery, but it's also a fascinating study in humanity. What do people do when they have months to wait before a violent end? What matters at the end - do you go to work, raise your kids, and pretend like nothing is wrong or does the social order break down as people complete their bucket lists or end it all before the world falls apart?

Hank is a genuinely good guy, trying to find his way in a job and a world that looks very little like the one he remembers. He is committed to doing his job, taking care of his sister Nico (if he can - she's quite the character herself), and doing what he perceives to be the right thing. His enthusiasm is the thing that carries him through, because he has little training or experience with being a detective. Winters excels at showing us Hank bit by bit. One of my favorite insights was that Hank takes case notes in college blue books because his father was a professor and left boxes of them in the family attic. While the mystery is slowly revealed, I also felt like I was gleaning a fuller picture of who Hank is and why he makes certain choices.

The Last Policeman will likely be different from any mystery you have read before. Instead of the usual high-stakes pressure to solve a crime, there are softer and bigger questions. Is this the way Hank wants to spend the time he has left? Does keeping the scaffolding of polite society upright matter anymore? This is the first book in a trilogy and I have the feeling that Winters has left plenty of breadcrumbs to follow through the books. I can't wait to find out what Hank Palace does with the rest of his time left on earth.

The Last Policeman
By Ben H. Winters
Quirk Books May 2013
336 pages
From my shelves
Book #1 for Readers in Peril X
Posted by Lindsey at 6:00 AM