Nonfiction November: Between You and Me 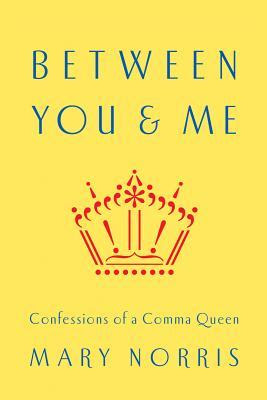 Mary Norris has been a copy editor at The New Yorker for more than thirty years. In that time, she has interacted with some (in)famous writers and editors and learned about the many steps that are necessary before going to print. Between You And Me is the story of her life from checking feet at a local pool (yes really) to becoming the beloved comma queen of one of America's most respected magazines. But Norris is not a stodgy grammarian detailing her life alongside the rules and regulations of writing. She brings joy and laughter to the sometimes bizarre standards of writing and editing and freely confesses her love of a good pencil and the occasional well-placed profanity.

I find that many great nonfiction books have a careful balance between teaching and humor. As a writer, Norris has a voice that is candid and fun. She loves what she does and it is evident that she enjoys talking with people about obscure punctuation and the frustration of referring to a group that includes both men and women. As someone who works as a freelance copy editor, I like to think that I know a few things about grammar. But Norris taught me so much about the reasons that we do certain things in the English language. She explains without making the reader feel bad about their lack of knowledge. English, as we all know, is a truly bizarre language. “Nobody knows everything—one of the pleasures of language is that there is always something new to learn—and everybody makes mistakes.”

Between You And Me is a book I would recommend wholeheartedly to so many kinds of readers - reader who are also writers, those who are interested in what happens behind the scenes of The New Yorker, reader who are nuts about grammar, and those who enjoy learning from a fascinating and funny teacher.


Between You And Me: Confessions of A Comma Queen
By Mary Norris
W. W. Norton and Company April 2015
228 pages
ARC from my shelves; won from Goodreads
Posted by Lindsey at 9:56 AM

Email ThisBlogThis!Share to TwitterShare to FacebookShare to Pinterest
Labels: Between You and Me, Mary Norris